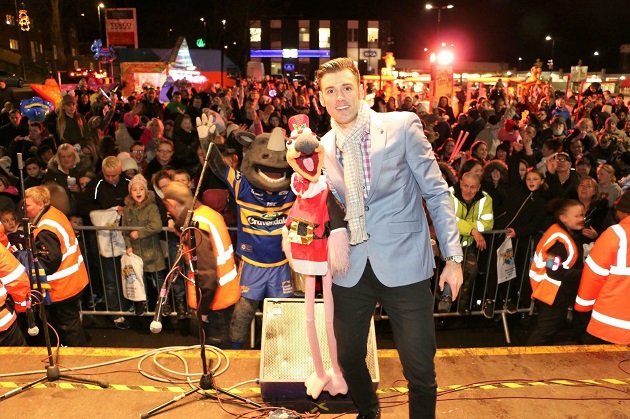 Ryan Swain is rapidly becoming one of the UK’s hottest emerging television, radio and online talents.

Ryan hails from Malton in North Yorkshire and annually hosts Bramley Shopping Centre’s Christmas Light switch-on and he has been asked to turn on the lights this year.

Ryan is also a popular social media star with over 200,000 followers online and has had 10 million video plays on his successful comedy videos about everyday life, parenting and mental health that he has battled. The Dispatch caught up with Ryan ahead of the BIG switch-on on Friday evening…

Are you looking forward to coming back to Bramley Shopping Centre to turn on the Christmas lights?

Yes, I always love coming back to Bramley. It’s a fantastic community and it’s always been so accommodating to me. This is the fourth consecutive year I have presented and turned on the lights and it is always a delight to do. I would personally like to thank Helen Garrand for getting me to come every year and do it, she is an asset to the local community.

What can we expect to see from you this year at the BIG switch-on?

Lots of high energy and lots of festive fun, I will be doing a lot of prize give-aways in between the acts and the artists on the night in the build up to the big switch on. I mean after all it is the season of giving on but I will also be performing a few songs with Frank Lamingo live on stage who has been seen at Flamingo Land Resort and on Britain’s Got Talent. We will be doing all the hits and then we will also be doing a meet and greet at the front of the stage so make sure you bring you phones and cameras as everyone will get a photo if they want one.

You’re an entertainer, working a full time job and a devoted family man how do you manage to do so much?

You only have one life, you’re young once, you need to enjoy it but also cram as much in to it is as you possibly can because they might come a day I might not be able to so that is my mind set I want to do as much as I physically can whilst I still can and not dwell on anything and have no regrets and also create lots of memories for my girls for when they grow up. I do have ADHD and drink a bit of coffee which probably gives me a booster.

Are you looking forward to Christmas this year?

Yes, probably more so than recent years my identical twin daughters Ivy-Kay and Isla-Yasmin are three and a half now and really know what Christmas is so that makes it much more magical and they’re only young once so I want to make this year as enchanting as possible for them and the family.

You also raise a lot of money and awareness for various charities. What inspires you to do it?

I was born with a major heart condition, basically a valve that should’ve closed when I was born but stayed open until I was four as it was discovered late by a local GP.

My parents Paul & Deborah Swain were told that I had to have a major operation straight away at Killingbeck Hospital in Leeds which was a cardiology specialists and they were given a heart-wrenching choice for me to have open heart surgery or trial the new technology at the time which was called keyhole surgery and they decided to go for the second option and the operation was successful and I survived and was given a second chance at life so there is no words that can describe how grateful I am so I use charity and giving something back to the less fortunate people out there as a way of doing it.

I also think that now I have made a name for myself and I am in the public eye, that some people in the industry get caught up in celebrity culture and become really selfish. To use your name to help others is a great thing to do, it can change a lot of lives and for me to do that is an absolute no brainer!

Who is Frank Lamingo?

Frank Lamingo is a memorable creation and puppetry sidekick of mine and we had a hit show together at Flamingo Land Resort in 2013, he became very popular very quick and is still performing outside of there at a lot of family events and children’s parties across the country and is most famous for his comedy songs which I have wrote myself.

The whole idea and concept was my brainchild and I own all the rights to him, the act and the songs. His most popular song is a remake of Taio Cruz’s Dynamite which we remixed and called “On One Leg Sometimes” and we have also remixed a lot chart songs such as Robbie Williams Candy, and Tinie Tempah’s Girls like in which we named “what the fans like” Frank was featured briefly on Britain’s Got Talent opening credits but our audition was never shown on TV for some reason.

A fellow singer called Ross from a band called Re-Take That helped me shape him in to the character he is today. He was commissioned and created by Phil Fletcher who is a famous puppet maker and puppeteer and works for the BBC and is most famous for creating and working with Hacker The Dog on CBBC.

Which charities have you raised money for?

I started fundraising from the tender age of seven where I baked biscuits with my mum and took them to school to sell for the RSPCA.

From there I went to volunteering at my local youth club to helping the homeless. In 2012 I broke a record and raised thousands for skateboarding 56 miles from Malton to Scarborough and back in less that four hours for Brain Tumor Research, and I have done the Fully Monty in 2013 where I bared all for charity and we raised £2,000 for children with cancer.

Since 2013 I have supported and donated to other various charities such as the ADHD Foundation, MIND Mental Health, SANDS (Still birth and neonatal death) Ryedale Dog Rescue, Cats Protection, Children In Need, Comic Relief, Balls To Cancer and so many more and continue to do so. Sometimes it is not always about handing over money, it’s about making time for the people you are supporting and donating your time to support and listen to them.

You’re a comedian, tell us your best joke?
I would hate to work in a Job Centre, imagine if you got the sack… You would still have to show up the next day!

What is the next step for your career?
I have a big year ahead of me next year in 2019 lots of live shows, tours and presenting and warming-up for some of the biggest names in showbiz all will be revealed and announced on my social media so keep posted.