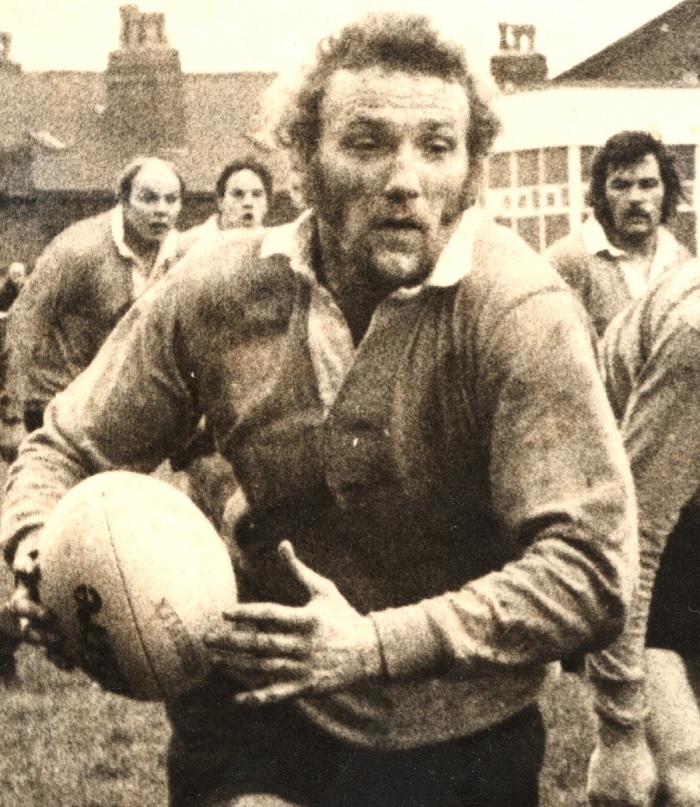 Having to compete at Leeds with Mick Shoebottom, John Holmes, Syd Hynes and John Langley for a centre or stand-off place, Trevor decided to travel the short distance and sign for Bramley.

His enthusiasm, tenacity and drive to win made him an instant favourite with the fans.

Trevor donned the amber and black of Bramley for the first time on 9 January 1971 at left centre where he celebrated with the only Bramley try of the match as they went down 5-13 at Batley.

Trevor kept his place right through the rest of the season and scored a try in the tense 17-20 defeat at home to Castleford.

The 1971-72 season saw Trevor play in 38 matches including his 50th appearance which he came on in the 18-5 home victory against Rochdale Hornets and to celebrate sped over for two tries.

His other try that season came in the 7-16 defeat at Blackpool Borough, he also kicked a goal in the 14-27 defeat at Odsal against Bradford Northern.

During the second half of the 1972-73 season Trevor had made the stand-off position his own and with his tenacious defence and flair in attack contributed enormously to Bramley’s most successful season in years.

By securing a place in the top 16 Bramley qualified to be in the first division of the Rugby League for the next season.

He also kicked a goal in the thrilling 16-14 victory at Hull KR. His 100th appearance for Bramley came in the 0-9 defeat at Leigh while his 100th “start” for the club came two weeks later in a great 14-10 win at Castleford.

The Yorkshire Cup tournament of the 1974-75 season brought Trevor tries in two successive matches, firstly in the record-breaking 52-17 home victory against Doncaster and then in the 10-23 defeat at Hull Kingston Rovers.

Despite his enthusiasm and drive Trevor couldn’t stop Bramley being relegated and had to find some consolation in scoring tries at McClaren Field in the victories against Halifax (11-3) and Dewsbury (20-6).

Life in division two was disappointing for both Trevor and the club during the 1975-76 season.

In the 17 appearances and two sub appearances that Trevor played in, he scored in the 6-12 defeat at Blackpool Borough and in one of the best performances of the season, a 19-13 win at Batley.

The arrival of Peter Fox at Bramley in the 1976-77 season resulted in Trevor playing most of the season in his favoured stand-off position after having a spell at centre the previous campaign.

In a remarkable change in fortunes Bramley gained promotion back to the First Division after putting a run of 14 consecutive league victories.

Trevor scored the deciding try at Huddersfield in a nail-biting 6-5 victory and he also crossed for a brace of tries in the 18-13 home win against the eventual champions Hull and also scored in the 20-8 win at Halifax.

During this record-breaking season Trevor made his 200th appearance in the 17-12 victory at Whitehaven and his 200th “start” in the 7-26 defeat at the Elland Road Greyhound Stadium against New Hunslet.

Following Peter Fox’s decision to leave Bramley for Bradford Northern and take some of the best Bramley players with him, the 1977-78 season was always going to be tough in the very competitive First Division.

The two league matches against Dewsbury saw Trevor score his only two tries of the season, one in the 23-3 home victory and the other in the 11-all draw at Crown Flatt.  This season also saw him play four games at loose-forward.

The 1978-79 season was to be Trevor’s last at Bramley and appeared in nine consecutive matches during the middle part of the season.

He scored a try in the impressive 22-18 victory at Whitehaven and then scored his final try in his last appearance for the club in the 12-31 defeat at Huddersfield in the second round of the Rugby League Challenge Cup.

The cup-tie at Fartown was Bramley’s third match in six days after drawing 2-2 in the home replay against Salford and then winning the second replay 7-5 in the match played at Swinton’s Station Road ground.

A hugely competitive player on the pitch and a gentleman off the pitch Trevor is fondly remembered by every Bramley supporter who had the privilege to see him grace the rugby grounds of England in the amber and black.