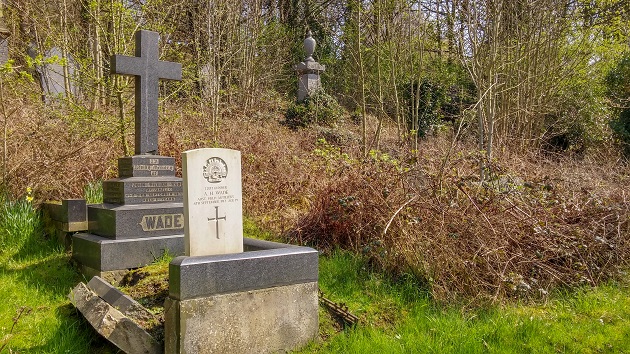 In what has to be one of the most overgrown graveyards I have been in Farsley Baptist Burial Ground has five casualties from WW1, writes Mark Stevenson.

I am not sure who was responsible but all of the Commonwealth War Graves are always clear. (Editor’s note: it’s the excellent Friends of Farsley Rehoboth group who have only recently started to buy, reclaim and maintain this historic burial ground in Farsley and provide access to all).

I was able to find all five headstones, three of which have addresses.

A week or so ago I thought it might be a good idea to take a photo of all the World War One graves in West Leeds.

It soon became clear I would need to narrow it down to get it done in the time I had.

Some WW1 war graves have private headstones which meant I would have had to look at all the graves in West Leeds which I did not have time for but I’m sure I will get around to.

Check out my coverage of Pudsey Cemetery,  St Thomas in Stanningley, St Wilfrid’s in Calverley, Kirkstall St Stephen’s and Hill Top in Armley.