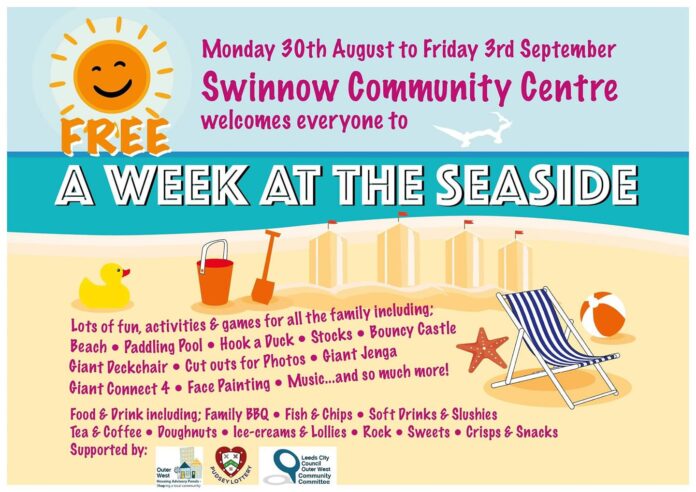 Are you ready for a week at the seaside? A week of fun, sand, games, food and more is bringing the sea to Swinnow Community Centre.

The centre is putting on a host of activities for all the family at its A Week at The Seaside event.

This includes games, a sandy ‘beach’, paddling pools, giant deckchairs, photos, face painting and the police will be there with special dressing-up kits.

A majorette troupe will also be performing and each day will have a different theme and food, with fish and chips from The Bearded Sailor, a big family barbecue and picnic days.

One of the organisers, Yvonne Allman, said there is no need to book for the week, which runs Monday 30 August to Friday 5 September. Yvonne said:

“After Covid, Cllr Trish Smith and I wanted to bring some fun to families who might be struggling. Not everyone can afford to go to the seaside, so we thought we’d bring it to Swinnow instead, and help people laugh again.”

“We had hoped to hold ‘A Week at the Seaside’ last summer, but due to COVID-19 we were unable to. As soon as we became aware Swinnow Community Centre had the all-clear to reopen, Yvonne and I worked extremely hard to pull everything together.

“We felt it was important to re-establish the centre as the heart of the community, and bring some cheer to everyone. Few people can manage a holiday at the seaside, especially this year, so we thought we’d bring the seaside to them!

“We have so many things planned, different ideas for each day, all hopefully making everyone feel as though they’ve been to the coast, if only a little while. We just want everyone to come along, have fun and relax after the difficult times we’ve all had.”

Yvonne also thanked supporters of the event, with food also provided by the Co-op, Morrisons and local dog walker, Bryan.

The event has been supported by Outer West Housing Advisory Panel, the Outer West Community Committee, and Pudsey Lottery. Britvic have provided the soft drinks for the week.