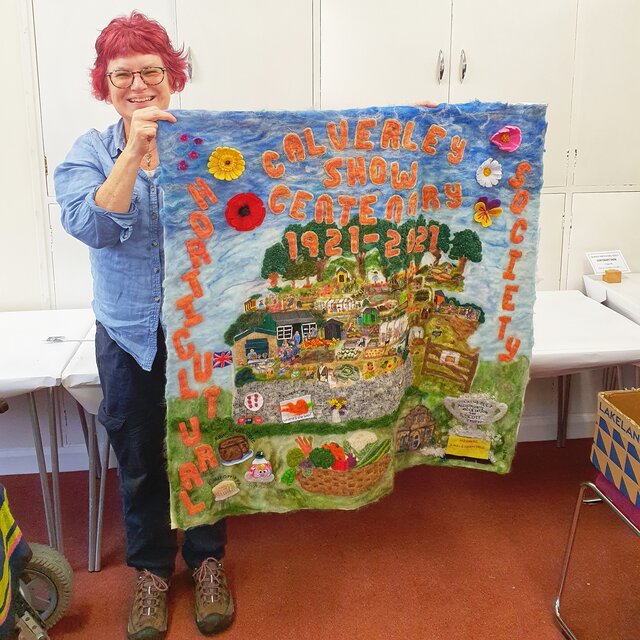 Calverley celebrated its centenary show in style at the weekend with more than 400 entries submitted by 88 people and the unveiling of a specially-commissioned artwork telling the show’s story.

Thanks to funding from the Pudsey Charity, Calverley Horticultural Society was able to commission artist Vickie Orton, from Otley, to tell the show’s story.

Vickie’s artwork, made in felt and fabric, features the village allotments, along with some of its gardeners, including the Society’s President, Councillor Andrew Carter.

The artwork also features one of the show trophies which was awarded to the elements in 1968 when the show was cancelled because of a hail storm which destroyed all the allotment produce. The winner is recorded as The Storm!

Following the successful virtual show last year, the 100th was held as usual in the Methodist Hall, but with all the refreshments, entertainment and presentations outside to keep it covid-safe. The result was a very successful show, said Bev Smith, who stepped down after ten years in the role.

‘We have had such positive feedback, with everyone saying how lovely it was to be back to something like normal,’ she said. ‘Even the rain didn’t dampen our spirits, we had enough cover to keep us dry!’ she said.

In the run-up to the show, the Society ran a garden trail competition featuring private gardens and other gardens of interest around the village, with a £100 prize to the winner.