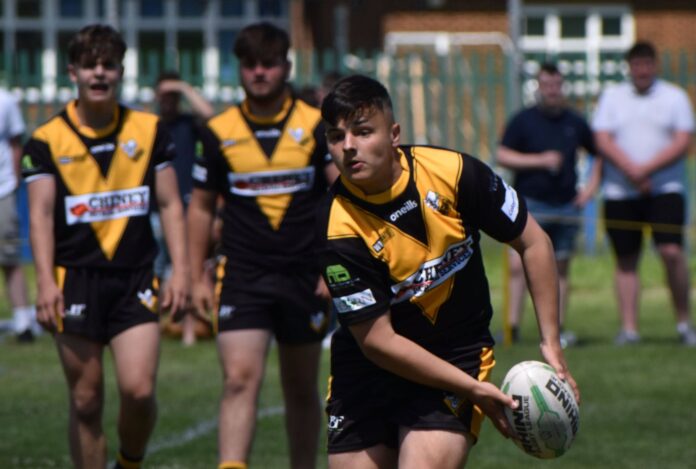 On the first scorching day of the year, the Bramley Buffaloes second team travelled to Scawthorpe to take on Bentleys second team.

The Buffaloes travelled with a very young team, looking to follow up on their win against Beeston Broncos. Bentley had a strong team made up of experienced and older heads and a smattering of younger players.

The Home team opened the scoring in the sixth minute, with a converted try following a sweeping move out the left-wing. Bentley 6 Buffaloes 0.

The following 20 minutes were frantic, with both sides pressing each other, trying to take a break and squeeze through the other defensive line.

In the 29th minute, with the Buffaloes on the attack after a period of sustained pressure, the referee waved ‘six again’, and the Buffaloes shipped the ball out to the Buffaloes’ left side. Substitute Callum Pratt crashed over for the Buffaloes opening score of the game. Tom Jenkins, who’s been outstanding with his kicking boot in 2021, slotted the conversion over from the touchline, levelling the score at six all.

On the stroke of half time, Bentley were on the attack and were given another set of six and threw a flat pass which split the Buffaloes’ defence and led the home side to score their second converted try, giving them the lead 12-6.

Ten minutes into the second half and the home team extended their lead on the back of a couple of repeat sets of six, with another converted try taking the lead out to 18-6.

In the 55th minute, the Buffaloes were back in the game when Jacob Oldroyd crashed over for his third try of the season. Kacper Mroz slotted over the conversion, taking the score to 18-12

On 62 minutes, Bentley broke through, losing the ball, the Buffaloes picked up the ball, but the referee brought them back for a six again decision. At the next tackle, in a one on one situation, the Buffaloes stole the ball. Still, the official decided that the tackle was complete and gave the ball back to the home team, and on the back of this second repeat set, scored another converted try, extending the score to 24-12.

In the 71st minute, Bentley broke free of the tiring Buffaloes defenders, and while trying to chase the down the break the referee got in the way of a chasing defender, stopping them from effecting a tackle; this gave the man with the ball a clear run to the line for an unconverted try. making the score 28-12.

In the aftermath of the try, Buffaloes scrum-half, Kieran McFarlane, was sent to the sin-bin for vociferously questioning the referee’s decision in the lead up to the try.

Bentley scored another unconverted try with four minutes on the clock, extending the lead to 32-12.

With pretty much time up on the referees watch. Bentley fired over a drop goal to take the final score to 33-12.

This game, was a tough test for the young Buffaloes team, wilting in the heat and losing players from the bench, the most notable being Hooker, Ryan Jones with a fractured collarbone.