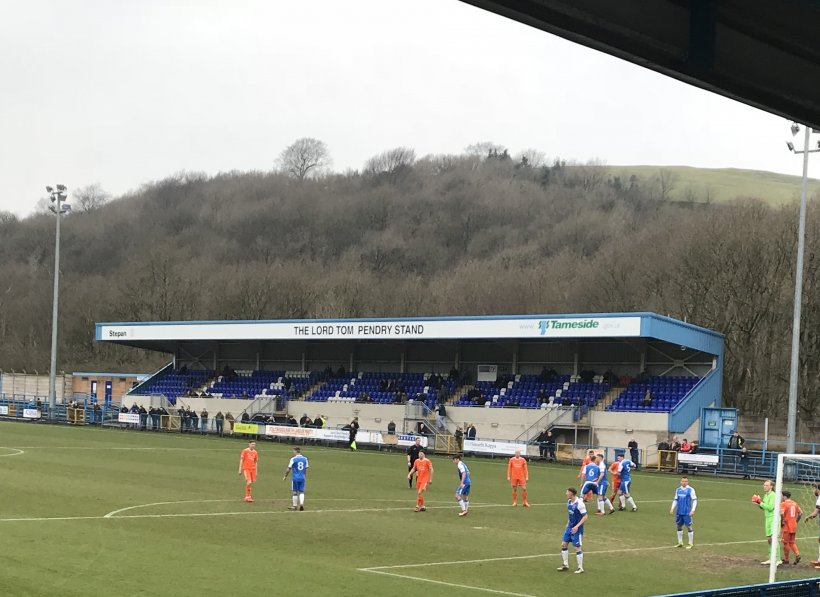 Farsley Celtic made it back-to-back wins as a Nathan Cartman hat-trick fired the Celts to a 4-1 victory over Stalybridge Celtic, writes Thomas Ritchie.

Cartman made it five goals in two games whilst Nathan Turner also got on the scoresheet, to do the league double over Stalybridge and keep Farsley’s playoff hopes intact.

Farsley started brightly and came close through Nathan Turner and Luke Parkin in the opening five minutes, however George Sykes-Kenworthy was able to deny the visitors on both occasions.

Paul Walker was the next to come close for the Celts as he forced Sykes-Kenworthy into an excellent stop, before Ben Atkinson crashed his strike against the crossbar after being played in by Danny Ellis.

Stalybridge grew into the game and it started to open up at both ends, with an Oli Roberts cross causing chaos in the Farsley box, Kyle Trenerry reacting quickly to make a terrific stop.

Just after the half hour mark Farsley deservedly took the lead, breaking through Luke Parkin who crossed for Nathan Cartman to flick home past Sykes-Kenworthy.

Just minutes later Farsley doubled their lead with Nathan Cartman getting his second, a lovely team move culminating in Paul Walker slipping in Nathan Cartman to fire home into the bottom corner.

Farsley started the second-half like they finished the first, and Paul Walker was the provider once more as he found Nathan Turner to slot home just three minutes after the break.

Cartman twice came close to securing his hat trick around the hour mark, heading against the crossbar from Luke Parkin’s free-kick before firing just wide across goal after terrific work again from Walker.

With little over 10 minutes remaining the hosts had their best chance of the game to that point courtesy of an Oli Roberts corner, Luke Ashworth finding space in the box but heading agonisingly over.

Nathan Cartman did secure his hat trick just moments after, as Cameron Murray broke the offside trap and unselfishly squared for Cartman to tap home for his fifth goal in two games, the forward hitting form just at the right time.

Cartman could have had a fourth after another flowing Farsley move, the striker linking up well with Cameron Murray once more before his curling effort floated just wide.

The hosts were able to finally get on the scoresheet in the third minute of added time. An injured Lewis Turner played Oli Roberts onside, and he was able to cross for Brice Pouamoun to finish and get what was nothing more than a consolation for the well-beaten hosts.