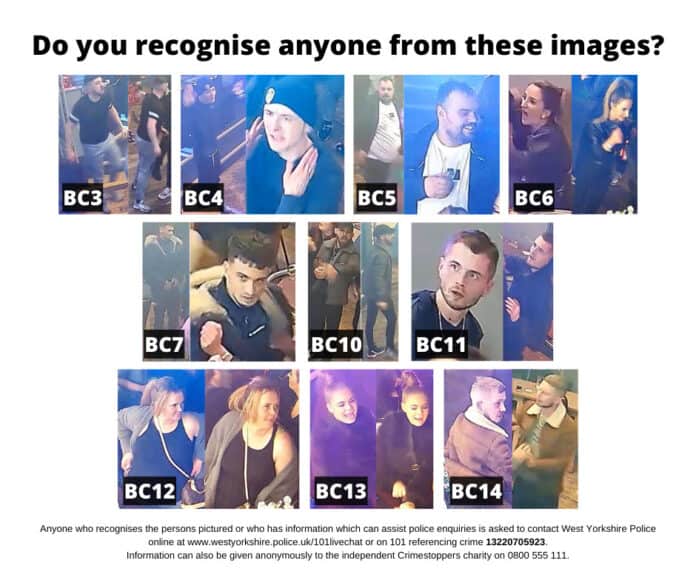 Police have released CCTV images of ten people they want to identify over a Boxing Day night brawl at a bar in Pudsey.

The incident occurred at Bojangles Bar, in Lowtown, Pudsey, at about 1am on Tuesday, December 27, while the venue was busy with friends and family celebrating Boxing Day evening.

A fight involving a large number of men and women broke out on the first floor of the premises.

A number of people were injured, and damage was caused to the premises during the disturbance, where chairs and other items were thrown.

Police and paramedics were called to the scene to deal with the incident.

The incident is being investigated as violent disorder, and officers from the Leeds West Neighbourhood Policing Team are progressing enquiries to identify those involved.

Inspector Phil Gill, who heads the Leeds West NPT, said: “Violence such as this in the local night-time economy is completely unacceptable at any time of year, but this incident was even more pronounced as it occurred during Christmas time when people were out to celebrate with friends and family.

“We simply won’t allow people who think they can behave in this way to get away with it. The venue has good quality CCTV and we are confident that we will quickly identify those who were involved in this disturbance.

“We would like to hear from that anyone who knows the identity of any of people shown in the images, and we would still like to speak to anyone who witnessed any part of the incident and has not yet come forward.”