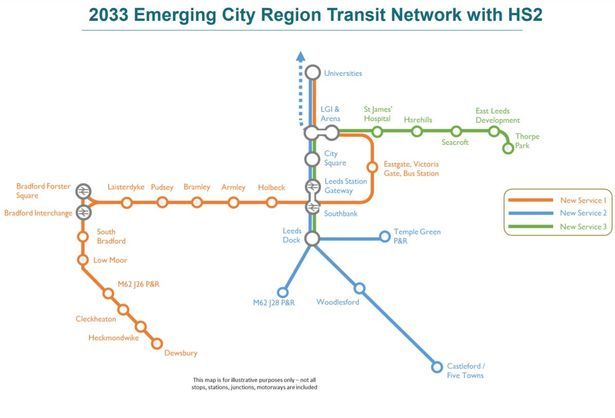 An extra £2 million has been put towards the development of a mass transit system which could run through part of West Leeds and beyond, writes David Spereall.

Plans to build a network connecting the centre of Leeds to its suburbs, as well as Bradford, Dewsbury and Castleford were first discussed last year.

The system may take the form of a tram, light rail or rapid bus network, though if built it’s unlikely to be up and running before 2033.

Purse-string holders at the West Yorkshire Combined Authority (WYCA), which oversees transport in the region, announced the extra money on Wednesday.

They say it will help support an assessment of the route options at their disposal, as well as an analysis of what mode of transport may be best.

Under the current provisional proposal, one line would serve Holbeck, Armley, Bramley and Pudsey before heading into Bradford and North Kirklees, ending at Dewsbury.

A third route appears to go through Leeds Station to Leeds Arena, St James’ Hospital, Harehills, Seacroft and on to Thorpe Park.

“It is more important than ever that our plans to improve transport across the region move forward as quickly as possible to support the economic recovery while taking into account the full impact of COVID-19 and potential long-term changes to how people work, travel and access services.”

“Our continued investment in schemes that help improve our transport network while tackling the climate emergency will be essential in the region’s recovery from the COVID-19 pandemic.

“Improved transport is vital to ensuring that we create a more inclusive economy that benefits all our communities.”