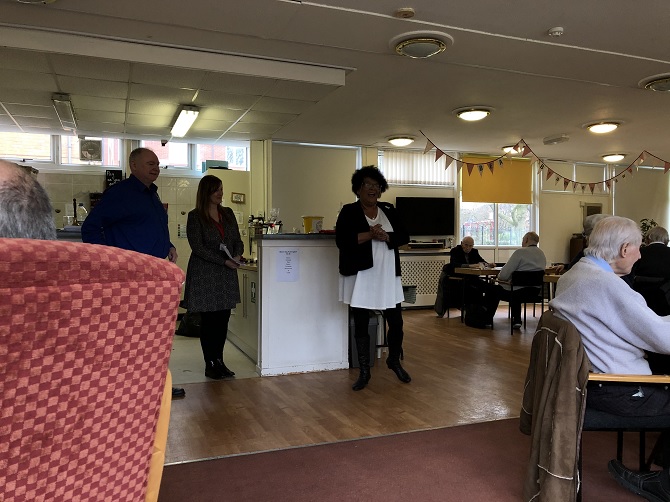 Mental health and positive coping tips were the subject of a recent talk at the Saturday Gentlemen’s Club at Bramley Elderly Action‘s bustling Bramley Lawn facility. Community reporter Josie Armitage was there…

Mental health and how to look after ourselves is even more important during the current days of social isolation and distancing.

Paul Abraham told his own story of his struggles with mental health throughout his life, which culminated in him almost taking his own life on New Year’s Eve in 2014.  He was saved by his Emergency Box.

He had previously received counselling and one of the suggestions was to put an Emergency Box together of things that made him happy.  For Paul this was his favourite DVDs  – Top Cat cartoon, Leeds United vs Arsenal 1972 and comedy. Watching these saved his life!  Paul said:

“Put together your own Emergency Box of things that make you happy.  This could include your favourite, DVDs, CDs, a book or a magazine, photos of your family or friends or pets.  Anything that can take you away from reality for a short while.”

Paul advised the gentlemen to watch out for each other and notice if anyone’s behaviour changes.

They may usually be well kept and start not shaving or caring about how they look.  They may stop going on trips.  Ask them if they are OK and give them chance to open up. Paul said:

“Seeking advice is not a weakness for anyone.  It’s a sign of strength that someone wants advice and wants to do something about their situation.  Write down how you feel if you like to write.  You could have a scrapbook of things you like – your favourite TV programmes when you were a child, quotes, photos of your grandchildren.  Anything that gives you good feelings when you look at it.”

Sharon Burke from the James Burke Foundation came along with Paul.  She shared her story of losing her son James to suicide and the huge impact this has had on her life.

He was a bright 21-year-old law student at the University of Leeds who excelled in rugby league and spoke fluent Mandarin.  Sharon’s delivers workshops to raise awareness of mental health.  Her advice from the heart to the gentlemen was:

“Look to yourself.  Look out for other people like your kids and grandkids after you have looked to yourself as you cannot pour from an empty cup.”

Paul and Sharon offered to do some mental health training with the group and left their details with the organisers Phillip and Christine.

Under normal circumstances, Bramley Elderly Action hold the Saturday Gentlemen’s Club at Bramley Lawn every Saturday from 10.30am – 3.30pm.  The group has been run by Phillip and Christine and a great group of volunteers for five years.  Christine said:

“It’s something for men to do on a weekend.  They’re often at home all week on their own.  Transport can be provided from Bramley and the men who come together on the bus feel part of a group.”

A hot lunch is provided, and the group go on trips based on things the men are interested in.

This includes going to Leeds Bradford Airport to watch planes and going to the National Railway Museum among others.

The men play dominoes and have chats, have a weekly quiz and guest speakers like Paul and Sharon come along to do talks.

If anyone is struggling with their mental health and would like support, please contact Paul Abraham at Heading Onwards paul@headingonwards.com or contact Sharon Burke at the James Burke Foundation for an informal, friendly chat and see how they can support you.