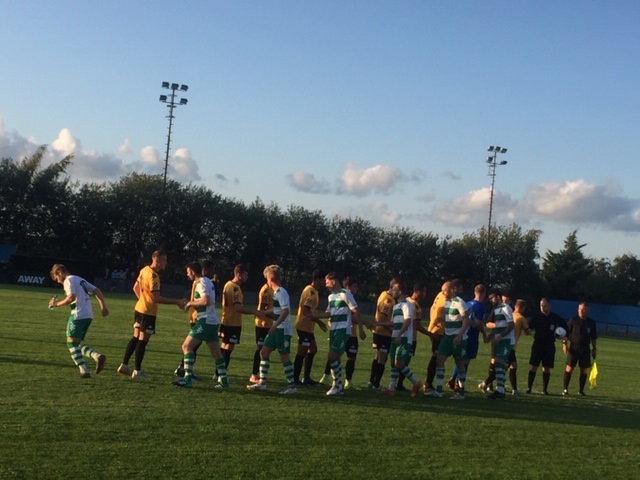 Farsley Celtic suffered a second defeat in a row last night as they lost 3-0 to a clinical Southport side, writes Thomas Ritchie.

First-half goals from David Morgan, Devarn Green and Paul Correia were enough to secure all three points for a Southport side that have yet to concede a goal this season.

The first chance of the game fell to Farsley five minutes in, as Will Hayhurst picked up Elliot Wynne’s long ball, and cut inside from the right before seeing his strike blocked by Ryan Astles.

Just a minute later the visitors broke the deadlock, Devarn Green slipping the ball into David Morgan who spotted Wynne off his line and superbly chipped the ball into the top corner.

Farsley then had a couple of chances to level including Tyler Walton’s lob that Daniel Hanford saved well, however Southport then doubled their lead against the run of play.

Elliot Wynne did well to save Morgan’s deflected effort low down, however the ball kindly fell to Devarn Green who was able to spoon the ball over Wynne and into the goal.

Jimmy Spencer came agonisingly close to halving the deficit with just under 10 minutes remaining in the half, Isaac Baldwin whipping in an excellent cross that Spencer could only divert onto the upright.

The Sandgrounders then stung Farsley on the counter to further extend their lead, Bradley Bauress playing a perfectly weighted ball through to Paul Correria who fired home superbly with a first-time half-volley.

The Celt Army started the second-half the brighter and came close when Jack Higgins nodded Will Hayhurst’s corner down to Chris Atkinson, but Atkinson couldn’t connect cleanly and Hanford saved.

With just under 20 minutes remaining Hanford was forced into action once more, Hayhurst picking up a loose ball on the edge of the box before unleashing a powerful strike that the Southport shot-stopper palmed away.

Farsley had one more chance to breach a resolute Southport defence in the final five minutes as Dave Syers’ low cross was cleared straight to Hayhurst, but he shot straight at Hanford, as the Sandgrounders secured their fourth consecutive clean sheet.

Here’s what manager Adam Lakeland had to say about the defeat: