Wally spotted at Kirkstall Abbey ahead of world record attempt 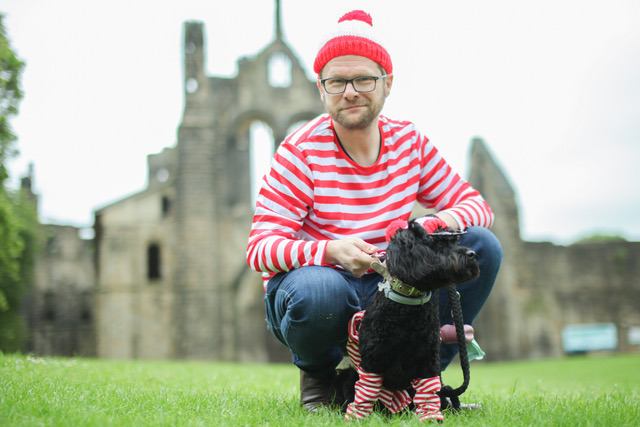 Wally was easy to spot when Councillor Neil Walshaw (Lab, Headingley) turned up early to get some practice in for the Where’s Wally world record attempt at Kirkstall Abbey.

The world record attempt is taking place at 2pm on Sunday, 10th June, in the grounds of the Abbey, and is open to all.

There’s also a Wally Dog Show at 1pm, with lots of free fun for families happening before and after.

The current record, held by Huis Ten Bosch, had 4,626 people dress as the Where’s Wally? character gathered at a Japanese theme park, according to the Guinness Book of World Records. They took the crown from a group of 3,872 Wallys achieved in Dublin in 2011.

To be counted, participants need to be wearing a Wally hat, red and white striped jumper, glasses and jeans. Those not taking part in the record attempt are still welcome to come along for the rest of the fun.

Wally’s Festival of Fun will run from 11am to 4pm, with lots of fun lined up for the whole family.

Along with the record attempt and dog show, there will be comedy, crafts and yoga.

For more information, visit the event page on Facebook.

In the evening, there’s a Jazz at the Abbey event with the Tom Sharp Orchestra – tickets available here. On Saturday, a Harry Potter-themed event at the Abbey is sold out.

The event is organised by Kirkstall Valley Development Trust, who are running a programme of affordable community events at the Abbey throughout the summer. The Trust is aiming to bring part of the nearby Abbey Mills complex into community use.