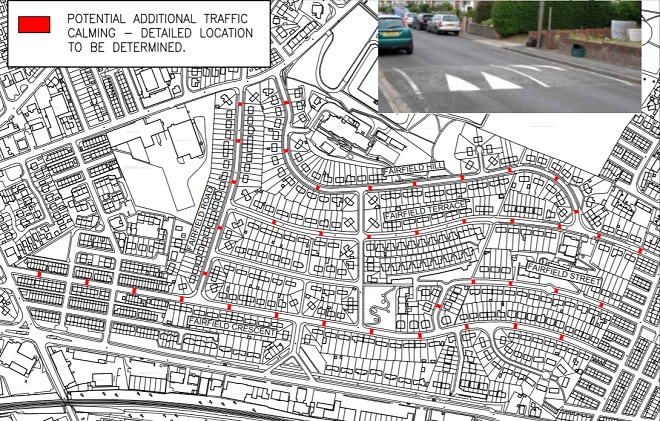 Speed bumps could help slow speeding drivers who are making the roads of Bramley’s Fairfields estate more like a race track.

Bramley’s councillors are consulting on £38,000 proposals to install speed bumps at more than 40 potential points on the estate.

Last June, concerned householders attended a public meeting at Fairfield Community Centre and raised their concerns about drivers tearing through their streets at high speeds, making to roads unsafe in an area where many families live.

Evidence from council speed surveys and results of the five-year accident statistics using Department of Transport methodology indicated the Fairfields did not qualify for a traffic calming scheme and therefore hadn’t been included in or funded for the schedule of schemes in the next financial year.

“We remained very concerned about the impact of speeding in the area, by a significant minority of drivers.

“After several months of looking into all possible options, we have identified some additional funding which could be used to establish a traffic calming scheme for the Fairfield estate.”

The proposal will involve speed bumps being installed across the road at suitable intervals to prevent vehicles being able to exceed the speed limit.

“We have started a detailed consultation with residents to establish the level of support for the proposal, providing there is strong support for the scheme, we will seek to implement the measures as soon as possible, so do get in touch to let us know your views.”

The scheme will be funded from the local Community Infrastructure Levy, which is received from development contributions across the city.

“Having listened to residents’ concerns we feel it’s an effective use of our available CIL money to try to improve road safety on the estate for the benefit of the residents.”

More details on how to contact all three Bramley councillors can be found here.