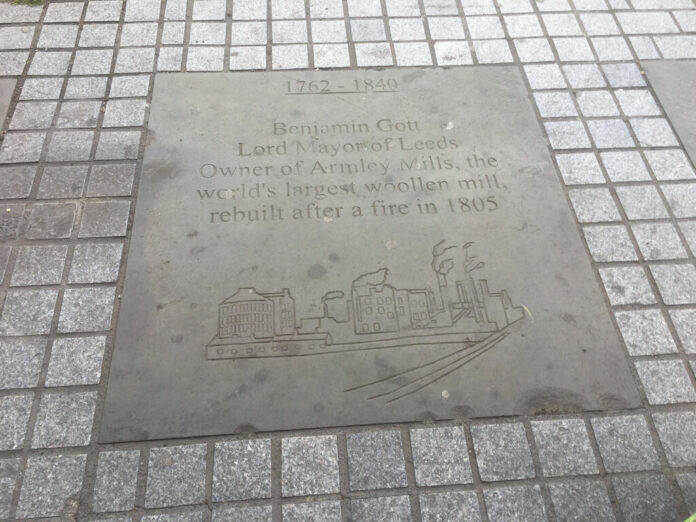 Residents of Armley have long been able to enjoy the beauty and facilities of Armley Park, from woodland walks, golf, cricket, bowling, tennis and football and now the newly built children’s play area.

We owe all this to Benjamin Gott, a great benefactor of Leeds who made a fortune when he was the leading figure in textiles.

Armley House (now Gotts Park Mansion) was his magnificent home from 1812. The leading landscape architect Humphrey Repton designed the gardens and incorporated the magnificent views over Kirkstall Valley and the Leeds Liverpool canal. This beautiful park and house were eventually leased to Leeds City Council for us all to enjoy.

Benjamin Gott was the owner of Armley Mills, which is now an interesting industrial museum. He was born in Calverley and was educated at Bingley Grammar School and then apprenticed at considerable expense to a woollen merchant. He eventually became a partner of the firm.

Both his sons joined Gotts and Sons and managed the company from about 1825.

By experimenting in new ways of making wool cloth, introducing new inventions such as steam and power looms, the family accumulated a large fortune. He donated to local charities, founded almshouses in Armley and became a collector of fine art. He helped to put Leeds on the map as a prosperous textile centre through his woollen textile empire.

Being an industrialist and manufacturer of great eminence in Leeds it was befitting that he should became the Lord Mayor of Leeds in 1799.

Joseph Gott, his sculptor son, created a fitting headstone for his father which can be seen at Armley Parish Church – St Bartholomew’s – where Benjamin was buried.

Community-led Bramley Baths is doing its bit to help its customers as the cost of living continues to increase.

The Grade II-Listed Edwardian swimming pool, gym and studio has been run by the community since 2013.

Baths CEO David Wilford said the ‘friendly baths’ were now friendlier than ever. He added: “Despite increasing energy costs, we are hoping to ride out the crisis. I can assure everyone we will not be putting up our prices unless we are absolutely forced to. We want to help you through the crisis and keep you fit and healthy.”

Monthly unlimited membership at Bramley Baths is terrific value at just £29, providing access to the pool, gym and studio classes.

Mr Wilford said his focus was also on supporting staff at the popular leisure facility, which earlier this year invested in state-of-the-art gym equipment.

People can also support the Baths by becoming a Friend of Bramley Baths for between £4.65 and £10 a month.

For more offers and membership options, contact reception on 0113 256 0948 or e-mail hello@bramleybaths.com.

Find out more information about becoming a WLD partner by e-mailing partnerships@westleedsdispatch.com

Facebook
Twitter
Pinterest
WhatsApp
Previous articleRead all about it! Here’s where you can pick up West Leeds Dispatch’s latest print edition
Next article‘More security and better shops’ calls for Armley Town Street