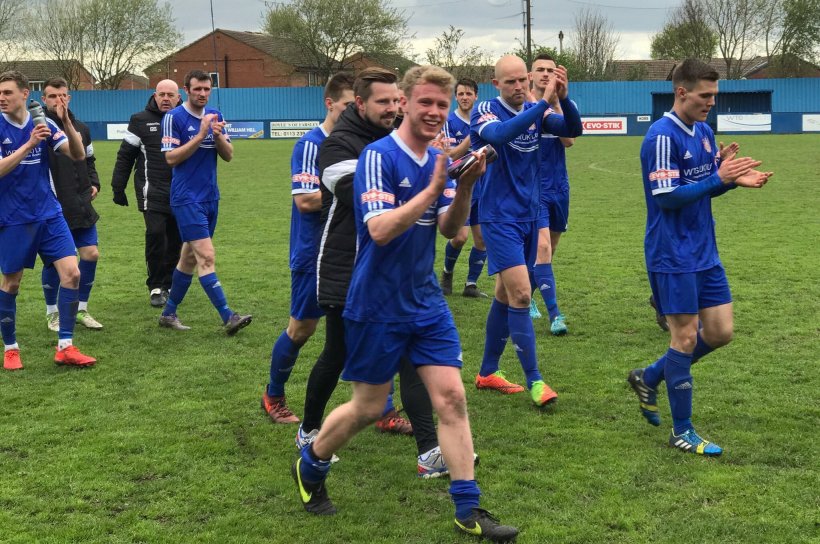 Farsley Celtic secured a playoff spot in their first season in the Evo-Stik Northern Premier Division with a 3-0 victory over Marine, writes Thomas Ritchie.

Goals from Nathan Cartman, Luke Parkin and Isaac Baldwin helped the Celts to a comfortable victory, and they will now travel to Ashton United on Tuesday.

After the game, a delighted Adam Lakeland said:

“I’m delighted that we’ve won, there was a bit of pressure on us today, like there has over the past couple of months with other sides having well-documented games in hand.

“Nobody’s given us a chance all season, but that suits us fine, we’ve shown over 46 games we’re a good team. To get 80 points in this league takes some doing, and as a newly promoted side we should be incredibly proud.”

The visitors started on the front foot and Joshua Amis missed a pair of guilt-edged chances early on, his first effort being superbly saved by Kyle Trenerry before he put the rebound wide.

Less than a minute later Farsley had taken the lead, Ben Atkinson’s blocked shot falling to Nathan Cartman who swivelled and fired home for his 20th goal of the season.

Midway through the first-half Trenerry had to be at his best once again, Daniel Mitchley finding Joshua Amis who was denied again by a terrific stop.

Farsley came agonisingly close to doubling their lead on the half-hour mark, Danny Ellis’ header falling to Cartman whose effort was blocked, before after an almighty scramble Martin Fearon saved a Cartman back heel.

On the stroke of half-time Luke Parkin doubled Farsley’s lead with his 10th goal of the season as he volleyed home Lewis Turner’s cross from close range.

The Celts’ dominance continued into the second-half and Nathan Cartman should have had a second, Martin Fearon making the save when one-on-one and Kenneth Strickland recovering to block the rebound on the line.

Cartman then had another fantastic chance after being played in by Paul Walker, but he dragged his effort just wide from inside the box.

With just over 20 minutes remaining William Smart almost pulled a goal back for Marine, however his header from Peter Wylie’s centre was saved by Trenerry.

The three points were secured with just over 10 minutes remaining as Lewis Turner was the supplier once again, crossing to the back post for Isaac Baldwin to head home for his fourth goal in two games.