The owner of an industrial estate next to the River Aire has said any delays in installing flood defences along Kirkstall Road could result in more businesses leaving the area.

Richard Condon owns the Cardigan Business Centre in Lennox Road and said it was ‘of the utmost importance’ that no further delays are incurred during the planning process for £112 million flood defences along Kirkstall Road. Mr Condon said:

“The cost of buildings and asset/contents insurance and lack of flood peril cover is now so prohibitive, long-standing family run Kirkstall businesses are still moving out of the area taking highly skilled jobs with them.

“Any delays or adverse adjustments to the plans put forward by the FAS team will only result in more companies leaving the area.

“When Flood Alleviation Scheme Phase 1 was completed in the Leeds city centre, insurance premiums and flood excesses returned back to pre-2015 levels. Phase 2 will hopefully result in similar returns to normal levels and provide confidence to business to stay in Kirkstall.” 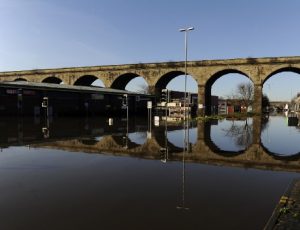 Mr Condon has given his support to a planning application submitted in December which outlines a raft of measures aimed at preventing a repeat of Boxing Day 2015 when the River Aire broke its banks due to Storm eva, leaving many businesses under several feet of water. He added:

“We have lived through the devastation caused by Storm Eva and do not ever want to have to experience this type of preventable disaster again.

“The plans put forward by the FAS team will prevent the level of flooding that occurred back in December 2015 and protect the people and businesses of Kirkstall going forward.”

Mr Condon added the level of information regarding this project had been well documented and called for work to start on the defences this summer.

Local concerns on the impact on the environment in Kirkstall and Burley have also been raised. And there has also been concerns about a lack of consultation in the area, with claims the plans are being rushed through.

The plans – which feature measures such as new defence walls, embankments and a large flood storage area – can be viewed here.