An influential public body that protects and champions places of historical interest has raised ‘serious concerns’ over the impact of planned flood defences on both Kirkstall Abbey and Armley Mills Industrial Museum.

Historic England have raised concerns about the lack of detail in a planning application for multi-million pound flood defences along the Kirkstall Valley. The plans come more than three years after the River Aire broke its banks on Boxing Day 2015, causing widespread flooding in the area.

“Whilst we are not formally objecting to the scheme as a whole, we have serious concerns about the lack of detail and justification for some of the works at Armley Mills and Kirkstall Abbey, which affect the highest graded heritage assets.

“We feel these concerns could be overcome through further dialogue prior to determination, or through suitable conditions which allow for agreement. At this stage we are unable to fully support these two elements of the scheme.”

River control measures will be installed to reduce the risk of flooding impacting on the historic Kirkstall Abbey, while part of the adjoining Kirkstall Meadows will become a wetland habitat.  At Armley Mills the defence works will include new protective walls, a new pipe bridge to improve water flow and two new control structures on the goit.

Historic England say they are supportive of proposals to safeguard the site from future flooding, which they say should contribute to the viability of the site as a museum and visitor attraction. But they add:

“The proposed flood exclusion option would cause harm to the significance of the complex by severing the historic relationship of the complex with the water and impinging on the understanding of the water management system across the site. This harm is acknowledged in the application.

“We are more comfortable that the level of harm to the upstream end of the site would be outweighed by the public benefits of the scheme but we have greater concerns about the proposals for the downstream end.

“In particular we are concerned about the removal of the existing Milford Place bridge, the severance of the historic pedestrian route by the proposed flood walls and the appearance of the large new sluice structure within the downstream goit.” 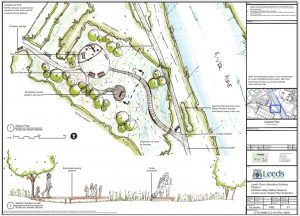 Historic England say the works within the abbey will require Scheduled Monument Consent and ‘significantly more’ detail will be needed before we can determine the acceptability of the proposed works. They add:

“At present the drawings we have seen are too high-level or indicative to fully assess the impact of the proposals.”

Leeds City Council have released further information to Historic England, but in a letter submitted to the council yesterday, they said the new details ‘did not have any impact on their position on the proposals’.

Leeds City Council is looking to decide the application at a planning meeting in March.

A second public consultation event about the flood defence proposals will be held on Tuesday 26 February, at Milford Sports Club, Beecroft Street, between 2pm and 8pm.

Visitors will have the chance to ask questions and get more information about the proposed defences and accessibility works such as new pedestrian bridges.