Planned flood defences in Kirkstall and Burley could impact on plans for a new community farm in the Kirkstall Valley, it’s been claimed.

Official objections to the multi-million pound proposals to protect the area from the River Aire have come from Kirkstall Valley Farm Steering Group and Burley Mills Allotments Association. Both welcome the need for defences, but say more work is needed to protect the local ecology.

But enthusiastic support for the scheme has come from influential civic watchdog Leeds Civic Trust.

Rosemary Atkins, from the Kirkstall Valley Farm Steering Group, said in her objection:

“Whilst we recognise the real need for flood alleviation in Kirkstall Valley, we are concerned at the potential impact on the agricultural land on which we are planning to create a Community Farm Scheme for Kirkstall Valley.

“Additional plans for the farm area include conservation and enhancement of wildlife habitats and biodiversity, education (including school visits) and University research, other commercial and community enterprises and a community gathering space. All these additional activities may also be negatively affected by the FAS2 scheme.”

Ms Atkins, of Burley, is seeking assurances over the access route for large lorries, the felling of cherry trees, impact on wildlife in Burley Goit, and the impacts of the access to and building of the upstream flow control structure, amongst others.

Concerns have been expressed by the nearby Burley Mills Allotments Association. Chairman Carlos Grattoni said in his objection:

“Our members were badly affected by the floods of 2008 and 2015 so we understand the devastating effects that they can have, and the need for flood alleviation measures in Leeds and the Kirkstall Valley.

“However, there are several issues that we object on the consultation and the proposed scheme.”

He said there needs to be ‘proper consultation’ with stakeholders and community groups and is concerned that access for machinery will be via the allotments:

“The document states that stakeholders will be consulted but this has not happened. We are concerned that the work will restrict plot holders’ access and create disruptions due to traffic, noise and personal safety as it has a large site compound next to it sharing the access to the site.

“Also it is not clear what status the site will be left after construction: restored as before or full of debris and rubbish! Additionally of the inconveniences produced by the work as the allotment and farmland will not be protected by the flood measures it will be suffering higher water levels and damage once the work is completed.

“The upstream flow control structure location and construction: We are concerned about the impact it will have to the plots, habitat destruction and beehives located between the plots and the Goit. We request that the position of the upstream flow control structure should be reconsidered and placed within the current Home office boundary, instead a diagonal line drawn in the proposal.”

Leeds Civic Trust has offered its ‘strong support’ for the scheme – but highlighted some areas of improvement:

“We offer our strong support to the scheme as a whole and would support any application for sufficient funding to deliver the level of protection the city requires. We particularly welcome the whole catchment approach to flood alleviation, with work being carried out further upstream to reduce run-off and/or hold water in times of flood.

“During our discussion, a number of points were raised and we hope that you will bear these in mind as the project moves forward:

“We support the aspiration to enhance riverside accessibility for both pedestrians and cyclists – where construction or maintenance access routes are required by the scheme, these should be constructed to a standard which allows their long-term use by the public.

“We hope that as the scheme is designed in detail, its impact on designated and non-designated heritage assets along the riverside will be minimised – if any historic elements need to be moved, the materials should be reused nearby.” 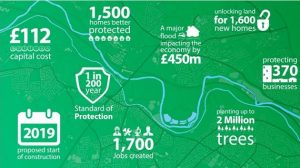 Leeds City Council has worked alongside the Environment Agency to put forward a planning application for phase two of the Leeds Flood Alleviation Scheme, which will cost a total of £112.1million.

The application comes almost three years after the Kirkstall corridor was left under several feet of water when the River Aire broke its banks, devastating local businesses.

A range of measures have been put forward to reduce the risk of flooding along a 14-kilometre stretch along the River Aire catchment, including the A65 Kirkstall Corridor which was badly hit by the impact of Storm Eva on Boxing Day 2015. The proposals run up to Apperley Bridge in Bradford.

These plans include both parts of the two-step process that has been developed to give a one-in-200-year level of enhanced protection against flooding for Leeds, helping to better protect 1,485 homes and 370 businesses.

If approved, work to deliver the first step – a one-in-100 year level of protection – is expected to start next summer.

The plans feature measures such as new defence walls, embankments and a large flood storage area. As part of the application it focuses on four key areas of Leeds Industrial Museum at Armley Mills, Kirkstall Abbey and Kirkstall Meadows, Apperley Bridge and Calverley.

The scheme also incorporates a flagship Natural Flood Management programme, delivering a range of measures such as creating new woodland and other natural features upstream on the River Aire. These will help reduce the flow of rainwater into the river and help reduce the impacts of climate change.

At Leeds Industrial Museum at Armley Mills, which suffered significant flood damage in 2015, the defence works include new protective walls, a new pipe bridge to improve water flow and two new control structures on the goit.

At Kirkstall Meadows the proposal is to transform 2.4 hectares into a wetland habitat to hold flood water and also feature kingfisher banks, otter holts and wetland scrapes for fish.

Other features of the scheme, which include new bridges and footpath improvements, will be handled in a separate planning application.

Also to follow will be the second element of the process if further funding is secured. This will complete the River Aire scheme in full by the creation of a flood storage area near Calverley, which will use the moveable weir technology used in phase one of the scheme in the city centre to allow water to be stored and then be released slowly back into the river in a controlled way.

Last month council chiefs announced the city’s proposal to proceed with a “pragmatic two-step solution” to provide flood protection measures for parts of West Leeds. This comes after the government said it was unable to offer funding above £65m towards the scheme which, when completed, would give one in 2000 year protection against flooding.

Works is due to begin this year to deliver an initial one-in-100-year level of protection.

This will then be upgraded to the full one-in-200-year level with a further phase of work after the remainder of the funding has been secured.

Details of the planning application can be viewed and commented upon here.