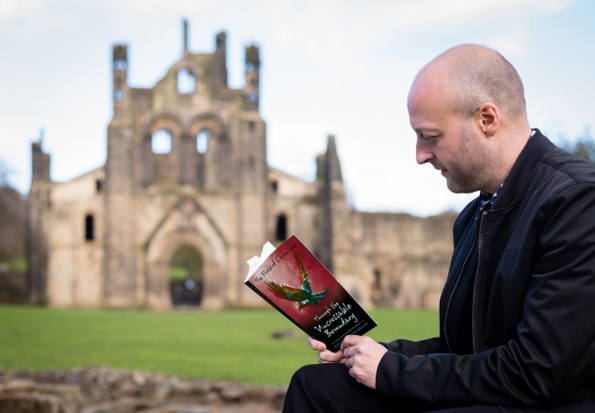 Young literature fans will get the chance to delve into a world of fantasy, adventure and magic at the #foundfiction story hunt at Kirkstall Abbey next month.

Children and their parents will hunt for extracts from Through the Uncrossable Boundary – Daniel Ingram-Brown’s conclusion to The Firebird Chronicles.

Each extract will hold a clue to the whereabouts of the next, with all of them tucked away in specific locations across Kirkstall Abbey – a significant setting in the novel.

As families take part in this festive treasure hunt that’s a cross between geo-caching and Pokemon Go, they’ll be encouraged to share their experiences to social media using the #foundfiction hashtag.

Through the Uncrossable Boundary is the concluding part of Daniel Ingram-Brown’s The Firebird Chronicles trilogy.

In the book, apprentice adventures Fletcher and Scoop must cross the Threshold into our world and reunite their creators. The apprentices face Gigan Ticks and confront the Nightmare Army as they fight to save their world from oblivion. Meanwhile, a teenage girl in our world struggles to come to terms with her mother’s disappearance.

The story hunt is staged by the #foundfiction project, which connects readers and writers worldwide through short stories that are left in random public spaces.

“The idea behind #foundfiction is simple. Writers send us stories, which we print out, fold into envelopes marked READ ME, and leave in public spaces for people to find.

“When someone stumbles upon a piece of #foundfiction, it marks a special connection between writer and reader – that’s the power of literature.

“Books were my world when I was a kid so I’m passionate about sparking children’s literary imaginations and creativity. We’ve started running workshops for kids to sharpen their writing skills, and this story hunt at Kirkstall Abbey is a great way to get them excited about reading. It’ll be a fun festive activity and I can’t wait to see how families engage with it.”

“It will be a special day for me, as parts of the Firebird Chronicles are set at the Abbey, and one of the main characters lives in Kirkstall. This is a book that deals with some difficult issues, like depression and grief, but it does so through a story that children can get lost in and enjoy, with a magical ending on Christmas Eve.”

Come along to Kirkstall Abbey on Saturday, December 15. The story hunt is open from 10am to 4pm. At the entrance you’ll find the first extract, which will contain a clue to the whereabouts of the second, and so on, until you’ve managed to trace all five extracts.