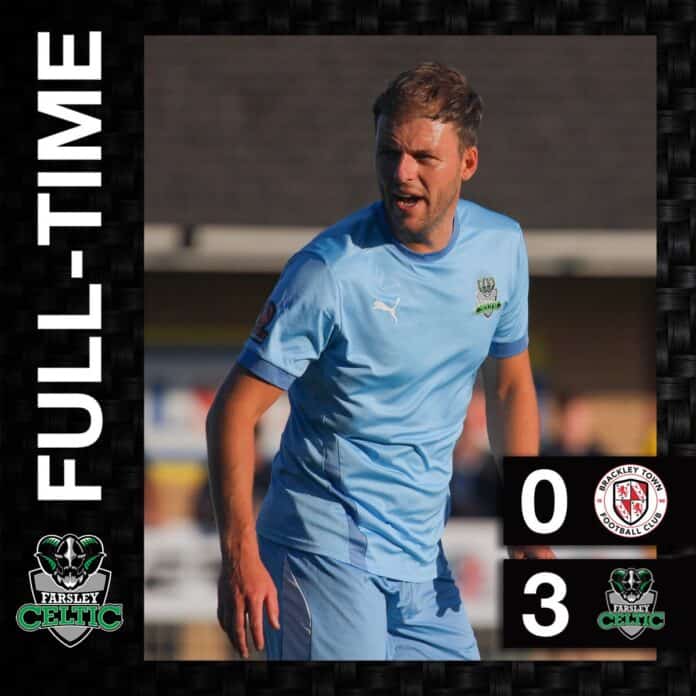 Farsley Celtic secured their first win of the season with an emphatic 3-0 victory away at last season’s runners up Brackley Town.

The Celts came into the game chasing their first three points after the season after an unfortunate 2-1 loss to AFC Fylde in midweek left Russ Wilcox’s side around the bottom of the table.

It was not long before the day began to swing Farsley’s way after Brackley winger Sheperd Murombedzi was given a straight red card within five minutes for a dangerous challenge on Bobby Johnson, giving the Celt Army a one-man advantage.

Despite being a man down, the hosts created many of the match’s first-half chances and no opportunities were better than the one given to Callum Stead after Brackley were awarded a penalty following a Lewis Turner foul in the box after 40 minutes.

Up stepped Stead and the forward would have opened the scoring from 12 yards if it wasn’t for Farsley goalkeeper Max Dearnley who produced his second penalty save of the season to keep the scores level at St James Park.

Just three minutes later, the momentum had swung completely and Farsley had the lead after Frank Mulhern played a silky pass through the Brackley defence, which Jimmy Spencer latched onto and converted to give him his first goal of the season.

The start of the second half would paint a similar picture to the first with Wilcox’s side coming under heavy pressure and Brackley almost equalised on the hour mark when Callum Stead broke through into the box before smashing an effort onto the left post.

The Celts doubled their lead five minutes later when Bobby Johnson picked up on a loose ball from a corner before firing a cross towards the near post, which Spencer met and finished to earn his and Farsley’s second of the match.

By now, the one-man advantage had begun to play its part with Brackley tiring and it was very close to being 3-0 when substitute Kian Scales darted through the middle of the park with the ball, breaking through the defence, but with just the ‘keeper to beat, the Bradford City loanee blazed his effort just over the bar. Spencer then rattled the bar from a free kick.

Then, with ten minutes left on the clock, the deal was sealed after Spencer turned from scorer to provider and slotted through the energetic Scales who calmly finished past the keeper to all but secure the three points for the travelling Celt Army.

The result propels Farsley up to 20th place in the National League North table with the Celts back at the Citadel next Saturday where they will take on Curzon Ashton at 3pm.

Boss Russ Wilcox was pleased with the win, but will be hoping for good news on the injury front after Luke Parkin was injured in the warm-up, Lewis Butroid was substituted in the first half and Chris Atkinson completed the 90 minutes despite a groin injury.