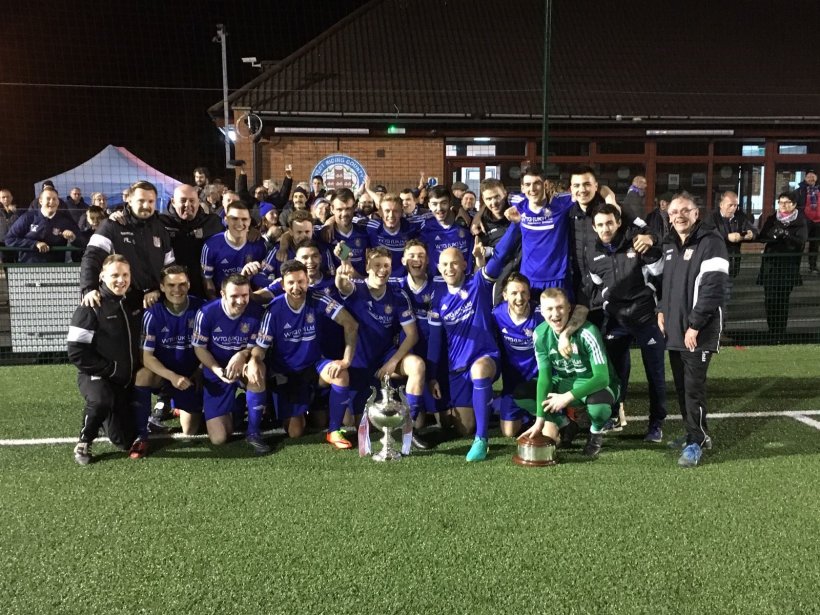 The difference in class was clear for all to see as the Celts dominated from the first minute, Nathan Cartman hitting a brace whilst Paul Walker and Luke Parkin also got on the scoresheet.

Farsley Manager Adam Lakeland was delighted to lift the trophy in his first season. He said:

“I’ve said all season I wanted us to win this competition, and we’ve had one or two tough games on the way.
“Every credit to the players, we just wanted to go out and enjoy it on a good surface, and we played some excellent football. I’m delighted to get my first trophy at Farsley!”

Paul Walker put Farsley ahead inside three minutes, Luke Parkin playing a superb slide rule pass through to Walker, allowing him to calmly slot past Barrett.

Farsley pressed for a second, and came close with Luke Parkin delivering a superb service from the left. However, Barrett saved well from Nathan Turner before an even better stop prevented Nathan Cartman doubling Farsley’s advantage.

Selby’s first chance of the game came as Liam Flanagan fed Joe Dale, but his effort was just wide.
Nathan Cartman came close again on the half hour mark, however he did find the target before the break, tapping home to double the Celts’ lead after a terrific run and cross from Paul Walker.

Liam Flanagan had a fantastic chance to pull a goal back for Selby on the stroke of half-time, only for the frontman to fire his effort over the crossbar from inside the box.

Farsley made it three as Luke Parkin got the goal his performance deserved, excellent work from Paul Walker and Nathan Cartman seeing the latter tee up Luke Parkin to drill his strike into the bottom corner.

Selby then had a brace of chances to get on the scoresheet, Danny Gray volleying just wide from Liam Flanagan’s centre, before Kyle Trenerry was called into action for the first time to deny Flanagan.

Nathan Cartman got his second shortly after, smashing home the rebound after Adam Clayton’s header from a terrific Parkin delivery crashed against the crossbar and kindly fell to Cartman’s feet.

Cartman could have had his second Farsley hat trick as his curling effort was saved by Barrett, before the Selby shot-stopper had to be alert to deny Paul Walker.

The Robins finally got on the scoresheet with 10 minutes remaining, Joe Dale finding Liam Flanagan whose effort took a wicked deflection leaving Trenerry helpless to prevent the goal.

There was still time for Farsley substitute Mark Bett to miss a couple of fantastic opportunities, and it was ultimately a comfortable and utterly deserved victory for the Celts.