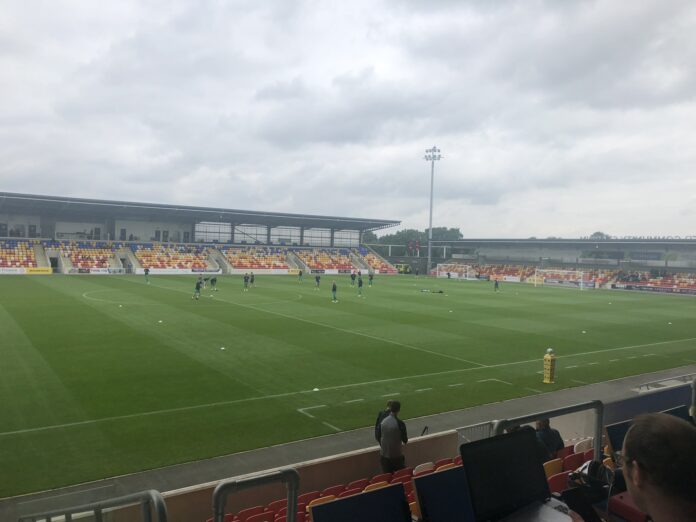 Farsley Celtic suffered a first defeat of the season as York City ran out 4-2 winners at the LNER Community Stadium.

It was probably more comfortable than the scoreline suggested for the hosts, who led 4-0 after 70 minutes, with Farsley’s late rally proving to be too little too late.

The early stages of the game were incredibly open as both sides found joy in the attacking third, but it was the Minstermen who could have been in front inside three minutes. Olly Dyson crossed for Clayton Donaldson at the near post, but the frontman failed to hit the target.

The Celts then came close when James Hanson nodded Will Hayhurst’s corner down to Jimmy Spencer, but the York defence somehow managed to scramble the ball off the line.

Just minutes later Farsley had another terrific opportunity as Spencer superbly sent Hanson through one-on-one with York ‘keeper Pete Jameson, but he stood firm to save with his feet.

At the other end, Tom Donaghy had to be at his best to deny Donaldson, Dyson initially doing brilliantly on the by-line to pick out the ex-Bradford City man six yards out, but Donaghy made an excellent reaction save.

Within minutes Donaghy was beaten, but it took a moment of magic from Kurt Willougby as he bent the ball into the bottom right-hand corner from 25-yards out.

That opening goal didn’t disrupt the flow of the game, and Farsley continued to create opportunities. Luke Parkin’s free-kick struck the wall and bounced out to Adam Clayton, who let fly from distance with his strike stinging the palms of Jameson.

However, the Minstermen struck a crucial blow on the stroke of half-time. Dave Syers attempted to clear a ball played over the top on the edge of the box, but it struck the fortuitous Mark Beck and looped over the helpless Donaghy into the goal.

With a two-goal lead York had the wind in their sails after the interval, and stretched their lead further when Michael Woods converted Donaldson’s centre at the second attempt.

The ever-dangerous Willoughby produced another fine save from Donaghy at his near post, before York were presented with an opportunity for a fourth when Jordan Richards was adjudged to have handled in the box.

York’s four-goal advantage didn’t last long, as Will Hayhurst hit back to trim the deficit with a fantastic strike. Having been moved up the pitch into midfield, Hayhurst picked the ball up 25-yards from goal and curled home a peach of a strike with his left foot past the outstretched hand of Jameson.

Farsley then struck again to make it a slightly nervy finally 10 minutes for the Minstermen, Hanson finishing from close range after Spencer had initially struck the bar.

It could have been a grandstand finish had Adam Barton headed home Will Hayhurst’s corner with three minutes remaining, but the final goalmouth action saw Donaghy produce another sterling stop to prevent York from adding a fifth, this time from substitute Mackenzie Heaney.