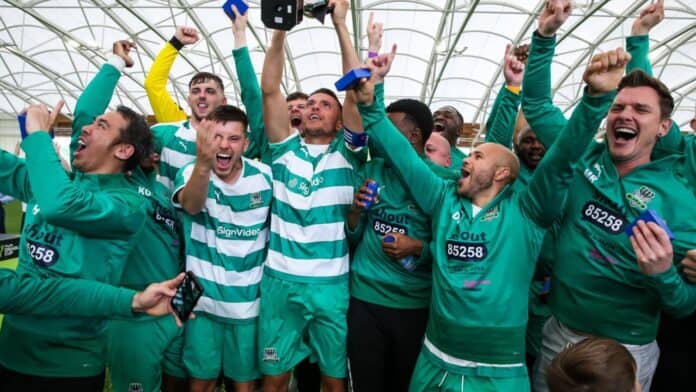 Farsley Celtic Deaf have been nominated in two categories in this year’s Deaf Sports Personality of the Year Awards.

It has been a successful year on the pitch for the Celts, triumphing in the EDF League Championship final at St George’s Park live on BT Sport, and qualifying for next year’s Deaf Champions League in Poland.

That momentum has continued this season, with the Celts’ Deaf side unbeaten in the EDF League, while also progressing through to the EDF Challenge Cup semi-finals.

Their achievements have been recognised in this year’s Deaf Sports Personality of the Year Awards, with Farsley up for two honours.

The management trio of Chris Evans, Darrell Sykes and Peter Wood have been nominated in the Coach of the Year category, after guiding their side to the EDF League Championship.

And as a reward for their successes this year, Farsley Celtic Deaf have been nominated in the Sports Club of the Year category.

Celts first team manager Russ Wilcox said: “I’d like to congratulate Farsley Celtic Deaf on their nominations, recognising their superb achievements this year. Get behind them and show them your support!”

You can vote for the Celt Army in the Deaf SPOTY Awards by clicking here. Voting closes at 11.59pm on Saturday 31 December.

Find out more about the Deaf SPOTY Awards here.