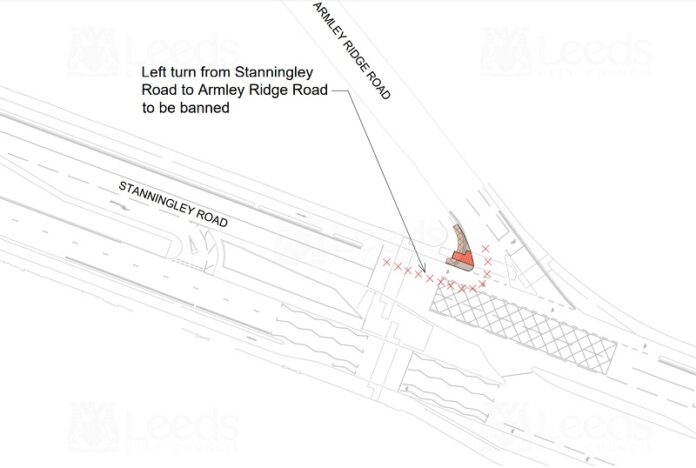 The local authority had published traffic regulation orders advertising the changes, which form part of a £19.66m package of improvements aimed at reducing bus times between Leeds and Bradford.

Council chiefs said the proposed order, which is currently in place only at peak times, will be implemented 24 hours a day, and will improve safety for cyclists at the Stanningley Road / Armley Ridge Road junction.

But local objections included 16 points of concern, including concerns that speeding is a major issue on Stanningley Road, with numerous collisions, including fatalities. they said that this should be the focus of any efforts to improve road safety in the area.

Objectors also said that banning the left turn into Armley Ridge Road will cause inconvenience to those affected. And one said that Gotts Park Avenue experiences issues with speeding and is used as a rat run, and that this scheme would worsen conditions here.

In rejecting the objections and approving the order, highways officers said they were aware of the issues with speeding on Stanningley Road, but do not have the power to introduce fixed speed cameras and must gain the approval of the West Yorkshire Casualty Prevention Partnership (WYCPP) in order to do so. WYCPP assessed the road in late 2019, and said it does not meet the criteria for cameras.

They also said there are alternative routes other than Armley Ridge Road available with modest increases in journey length and that only around 24 vehicles make the left turn into Armley Ridge Road between 7am and 7pm on a typical day. The
impact on levels of traffic on Gotts Park Avenue ‘would therefore be very small.’

The council has since installed mobile speed cameras on the A647.

The full council report can be read here.

WLD reported on calls for a reduced speed limit on the A647 in Armley back in 2018. Community speed watch days run by local residents and police were also held following a spate of fatal accidents on the road. WLD has repeatedly followed similar concerns about speeding and noise on the A647 in the Pudsey/Thornbury area, with calls for permanent speed cameras in the area leading to Dawsons Corner.