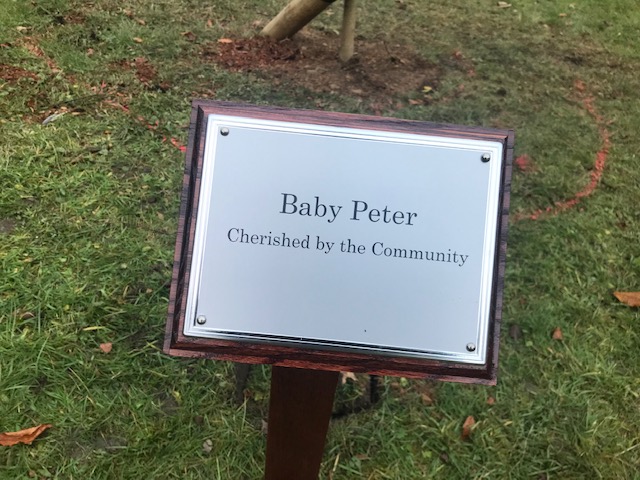 It’s now five years since a newborn baby was found in a Tesco bag, wrapped in a white shirt outside the rectory at St Peter’s Church in Bramley.

Despite the best efforts of the emergency services he was pronounced dead that fateful morning of 23 November 2016.

The mother of the baby has never come forward or been identified and – amid an outpouring of grief by the community – the baby was named Peter by locals after the church where he was found.

This afternoon members of the community came forward again to again pay their respects to Peter.

People who gathered in the churchyard saw a simple yet moving service, including a reading and a prayer, as Baby Peter’s ashes were finally buried.

The grave was marked with a simple plaque, which was inscribed:

Cherished by the community”

The grave is situated under a new tree – Peter’s tree, the service was told – funded by local councillors and planted on behalf of the whole community of Bramley. At a later date a stone tablet donated by a local monumental mason will be installed, along with a bench so people can pause and reflect.

The service, conducted by the Reverend Paul Crabb, was moving and attendees paid their tributes at the end with several moments’ silence. It was impossible not to be affected by the service – thoughts surfaced about baby Peter, but also for his mother and what she must have been going through.

“Bramley has never forgotten Baby Peter nor his mother. Many have asked about them during the last five years. People young and old have expressed their great sadness at what happened, alongside their concern that the mother has received all the care and support she deserves.”

It’s impossible to know what Peter’s mother was going through that desperate November night five years ago. Perhaps one day she may make her way here, sit on the bench and remember her much-loved child, and find some comfort in how the community of Bramley took Peter to their hearts.