When I was a nipper my mother used to tell me ‘there’s good stuff in little room’.

Who’d have thought, some 40 years later, that I’d be saying the same thing about Armley?

Armley’s been much maligned of late. There’s been a lot of bad publicity about street drinking, anti-social behaviour, crime and the like, especially around Town Street.

A look at some of the Armley Facebook groups shows how deep the ‘feel bad’ attitude goes amongst some residents.

But, at long last, are there signs that some of the ‘feel good’ attitude might just be returning?

The high profile All Together Armley group has outlined a number of ways Armley can improve – and they’re already hard at work on putting together the first Armley Festival for this summer. A business forum recently had its first meeting and there’s talk of an Armley in Bloom group being set up.

The high profile work of Armley Junktion – the home of the Real Junk Food Project – has been well documented.

The pay as you feel enterprise is now recycling good food destined for the bin at similar cafes across the country – and in Europe and Australia. How’s that for putting Armley on the map? Armley Junktion itself has benefited from a few improvements recently. 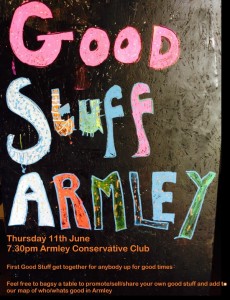 Then there’s the work of the Armley Good Stuff group on Facebook. The group shares and discusses the ‘good stuff’ that’s happening in the area – and it’s growing in popularity, with more than 700 members.

Last year they organised a public event to highlight all the positive things people are doing in the community – and another event is planned soon.

Playbox was run from an old shipping container by local residents in Charlie Cake Park last summer and provided much-needed opportunities for local youngsters to play.

The guys at FixIT Leeds are a fab social enterprise, recyling computers for as little as £20.

And that’s before we start to talk about the great work of Armley Helping Hands for elderly folk and good businesses like Cafe 53, who have come to Armley and are making a real go of it.

Interplay Theatre does fantastic work with young people in the area – the list goes on. I’m sure there are many others who do good work who I’ve missed off my list …

Yes, there are setbacks. We recently documented the farcical consultation over the former Whingate School site and had our say over the whole depressing affair.

And, lest you think we’ve gone completely idealistic and naive here at The Dispatch, we know the problems on Town Street and beyond are still a long way from being resolved. Action arguably took too long to happen and we’re still paying the price for that.

But what I hope you’ve gained from this snapshot is a glimpse of just some of the ‘good stuff’ that’s happening in Armley. Perhaps you’d like to join in and support it in some way. Perhaps then, the speed of change may become even quicker…