#hatelitter – Can you find mosaic protest in Calverley Woods? 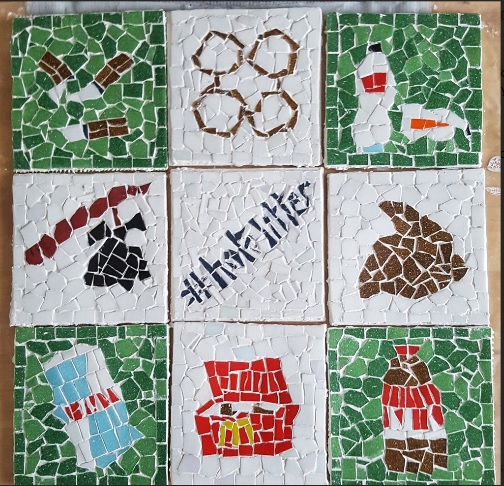 Anne, who regularly runs in Calverley Woods, is also a plogger – someone who picks up litter when they run. Each time she runs, she collects as much litter as she can carry then either disposes of it in her recycling or general waste bins. She said:

“I get so cross when I see the careless way people just toss litter our of their car windows when they park in the entrance to the woods, or inconsiderate dog owners who leave poo bags hanging from tree branches, what is that all about?”

Anne said there were not large amounts of litter in the woods, which made it all the more noticeable when bottles, wrappers, cans and cigarette boxes were dropped. She added:

“Collecting the litter is one thing, but I just wanted to make a statement about it by creating mosaics and putting them in the woods for people to see. The idea is hopefully that it will make them think about litter and how it spoils our woods.”

The set of nine is created on recycled tiles.

They feature the most often-found litter in the woods, including cigarette ends, bottles, cans, packaging and poo bags, and have been hidden throughout the woods.

They are mapped by GPS and if they are still there in a year’s time, she’ll collect them so that they don’t become litter.

Anne is also a regular contributor to the West Leeds Dispatch. You can find her personal blog here.