Bramley: Day of remembrance for Battle of the Somme centenary

A poignant service of remembrance was held at Bramley War Memorial to mark the 100th anniversary of the Battle of the Somme.

A total of 77 men from Bramley, Rodley and Stanningley lost their lives at the battle. 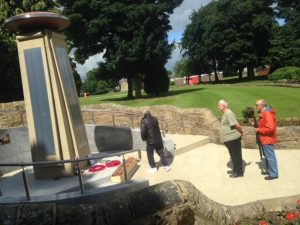 The day began with an Act of Remembrance at 7.30am, the exact time the battle began 100 years ago. The Reveille was sounded by bugler Sally Clark, who also ended proceedings poignantly with the Last Post.

A longer Service of Remembrance took place from 10.45am, again with a bugle sounding.

Both sessions were extremely well attended by local residents and war veterans and families, of all generations, of those who died.

A special exhibition highlighting the conditions at The Somme and other historical facts about the first world war was housed in the parade of shops opposite the memorial.

David from Bramley DIY with 1 of 8 boards on display in shops tmrw part of Somme commemorations at the War Memorial pic.twitter.com/RxTKggjmtP

The event was organised by the Friends of Bramley War Memorial group.

A service of remembrance was also held yesterday evening in Farnley.