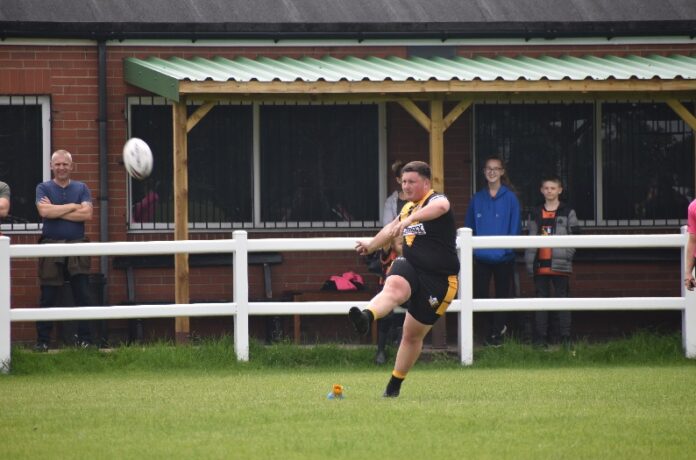 Bramley Buffaloes met a strong and well-drilled Kings Cross side on a humid afternoon in Halifax, where Bramley took the field with a mix of established first-team players and players stepping up from the ‘A’-team.

The game started brightly with strong tackling from the Buffaloes and powerful running up-field by prop Andy Ali who went in for the Buffaloes’ opening try after just two minutes. This was converted by Martin Loveridge. Buffaloes 6:0 King Cross.

In the opening 30 minutes, the two sides looked evenly matched and both teams drilled into one another, trying to carve out an opening.

On 27 minutes, King Cross collected a loose ball on their own 20m line, and despite the Bramley defender chasing them down over a 60 metres sprint, they could not prevent a converted try from being scored wide-out. Buffaloes 6:6 King Cross.

While both teams played well and showed the promise of further points being added to the scoreboard, King Cross had the better end to the first half. With just minutes to go before the half-time whistle was blown, they managed to score two converted tries on the 38th and 40th minute. This left the Halifax side with a rather flattering 18:6 lead. Half Time Buffaloes 6: 18 King Cross.

Bramley started the second half with a determination to even the score, and in the 47th minute, Codey Downey broke through the strong wall of defence. He proceeded to sprint 40+ metres and planted the ball over the line to give Bramley the opening try of the second half. This was converted by Martin Loveridge. Bramley 12:18 King Cross.

King Cross, however, had a quick response. In the 52nd minute, a try was made out of nowhere as Connor McGill kicked the ball downfield on the Buffaloes last tackle. As they so often do, the ball bounced wickedly and managed to evade the Buffaloes’ cover. This left the King’s Cross winger with the simple job of bounding over the line with the ball near the corner flag. This was converted, leaving the score; Buffaloes 12:24 King Cross.

Soon after, King Cross went in for a further converted try in the 55th minute to widen the score to Buffaloes 12: 30 King Cross. Although the Buffaloes were behind, this still somewhat flattered the King Cross side, who had to work very hard for every metre gained.

As the second half played out, the Buffaloes pack worked hard with some very strong tackling and this cumulated in an opportunists try for Lochlan Mcgill, who went in from five metres at the side of the posts. Martin Loveridge successfully kicked the goal bring the Buffaloes up to 18:30

The Buffaloes maintained the pressure and fell just short on a couple of occasions before the referee sent Andrew Ali, who was arguably the Buffaloes man of the match, to the sin bin after a series of robust Buffalo tackles had put them on a team warning.

After receiving two tackle resets, King Cross took advantage of the extra man and were awarded a penalty under the posts. They took the opportunity to secure their win by kicking the goal in the 65th minute. Buffaloes 18:32.

This was the final score of the match, and King Cross did deserve to win.

The Buffaloes, however, played their full part in the match and impressed the supportive crowd in many ways. With a little more luck and the bounce of the ball going the right way, the final score could have easily have been much closer.

With the first team travelling to King Cross, Bramley had a young but enthusiastic squad taking on a Batley Boys side containing some of their experienced first-teamers after their first team match had been called off.

With three minutes gone and following a Bramley knock-on, Batley took the lead through a try by James and conversion by Tomlinson.

However, within minutes, Bramley were level after Bobby Brown finished off a good move by diving over near the corner, followed by a superb conversion from Tom Jenkins to level the scores.

Despite the dry conditions, both team’s struggled to keep possession for complete sets and only a break by Batley, which saw Clark racing over to break the deadlock. Tomlinson added the conversion to give Batley a 12-6 interval lead.

The second half started with both sides not giving an inch until the 50th minute when James scored his second try of the afternoon to put the visitors 16-6 in front.

The following five minutes were a disaster for the Buffaloes as from the next set after kick-off, Batley’s Ridley sliced through the defence and with Tomlinson adding the goal, Batley Boys extended the lead to 22-6.

Spectators thought they were seeing a big-screen replay as Batley scored again without Bramley touching the ball apart from kicking off to restart the match as James completed his hat-trick of tries to make it 26-6 to the visitors after 55 minutes.

Confidence was now soaring within the Batley Boys team, and their larger and much more experienced pack continued to try and blast through the Buffaloes defence. The home side did well to restrict Batley to just one more try in the final quarter as Ridley went over for his second try of the game to complete the scoring and a 30-6 victory.

The Buffaloes “A” team coach and players can be proud of their efforts and with steadier handling would have taken the Boys from Batley a lot closer, a game of a young and enthusiastic team losing to a bigger and more experienced side.

A lot of positives and a bright future for these young Buffaloes.