A Bramley SAS hero who is said to be the inspiration for James Bond 007 has been remembered in a reprint of memoirs first published years ago.

Major John Geoffrey Appleyard was reputed to have been the inspiration for the fictional 007 after he served in the Second World War with author Ian Fleming. 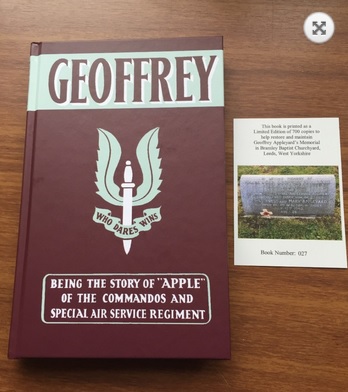 The swashbuckling Bramley-born son of former local garage owner John, Major Appleyard was, like Bond, a bit of a playboy in his youth.

In 1941 the commando was awarded the Military Cross for his “services in the field” after a daring rescue to bring two secret service agents who’d been operating in France back to England carried out by submarine and then dingy.

He was involved in daring missions from Dunkirk to West Africa, as well as cross Channel raids on occupied France and the Channel Islands.

He was 26 and second in command of the newly-created SAS when his plane failed to return to its base following a mission in Sicily. He was probably shot down by friendly fire.

Now John and Fran Barker, of Rodley, are the guiding lights behind the republishing of an illustrated memoir to Geoffrey which was first published by his father John Earnest Appleyard, some 70 years ago.

The couple, who are volunteers at the Friends of Bramley War Memorial, have republished the memoirs ahead of the 100th anniversary of Appleyard’s birth on December 20.

They’re hoping any profits from the sale of the books will go towards renovating Appleyard’s memorial at Bramley Baptist Church.

Last month Appleyard’s name was unveiled on one of the new plaques at Bramley War Memorial and within the Book of Remembrance, now on display at Bramley Library.