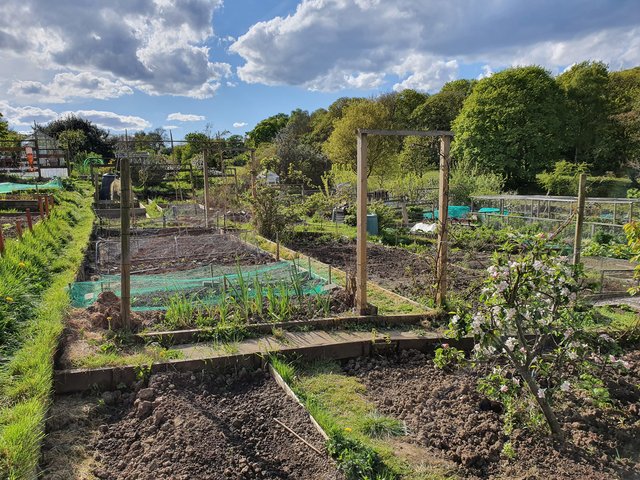 When the Prime Minister announced the lockdown back in March, writes Anne Akers, I was listening intently for him to say something about allotments. Could we still go and look after our lots? If not, I was about to dash down with my two sacks of maincrop seed potatoes to get them in the ground before the new rules came in. They’d be ready to harvest by the time it was all over…hopefully

As it turned out, allotments stayed open, though we had to close our stores. It’s very easy to socially distance when full plots are the size of a tennis court and we’re all quite solitary anyway. We were all grateful that we could find a bit of normality.

Nature doesn’t trouble itself with our problems, it just gets on with growing, especially when the conditions are right. And the conditions over the past couple of weeks have been right, with sun and warmth and now rain. The end of April and beginning of May are busy times for gardeners in ordinary times, so we have to get on with the planting and cultivating.

All the seeds which have been happily growing in my greenhouse at home are in the process of being hardened off, that’s the equivalent of telling a plant not to wear its coat inside as it won’t feel the benefit once it’s outside. For those with cold frames, you can put the young plants there until they get used to the great outdoors. I don’t have a cold frame so I’m putting plants out during the day and bringing them in at night until they’re ready for the allotment. It’s good exercise, though next year I’m going to invest in a cold frame!

I had a contingency with the greenhouse growings. If I couldn’t go to the allotment, my garden at home would be turned over to veg, with sprouts growing among the roses, cabbages with the delphinium and beetroot in the borders. As it turns out the seedlings have been so successful I don’t have room for them all down at the allotment, I plan to guerrilla plant them around the village, but don’t tell!

Over the next month I’ll be transferring the young plants from home down to the allotment, two carrier bags at a time, it’s all part of the daily exercise and I get to say hello to people as I pass.

We are of course socially distancing, though it’s nice to exchange greetings and news with fellow allotmenteers. We are banned from touching the taps, but thanks to clever little gismos designed and made by Irish Tom, as we know him, we can turn them on and off without touching them.

Potatoes are in, I’ve planted second earlies (new potatoes) and two lots of maincrop (Maxine and Maris Piper) which should see us through until next year if the harvest is good. The earth where they are buried is looking very bare, but soon the leaves will be peeping through and there will be no stopping them.

Onions and shallots are also in the ground, they can be planted as early as November, but I leave it until the spring as my soil is so heavy and the poor plants could rot in the ground if there is heavy rain. I plant sets, or bulbs, though they can be grown from seed. Shallots are the most satisfying, one bulb yields half a dozen shallots, while one tiny onion bulb grows into a larger onion. Some experts say it’s not worth the effort to grow onions as they are cheap enough to buy and available all year. It’s fair comment, but none of us toil in the allotment thinking it’ll be a money-saver. If you take into account the time and effort needed to produce such fine fruit and veg, it’s cheaper and easier to shop at the supermarket, but the satisfaction of harvesting and eating your own produce is incomparable, plus it’s organic and full of flavour.

Personally, I’d not have it any other way, I love going to the allotment, yes it’s hard work, I walk there and virtually crawl back, sometimes I have a nap when I get home, sometimes I have beer,  sometimes I have both! But the rewards can be measured in a feeling of wellbeing, satisfaction at a job done and a belly full of tasty fruit and veg.