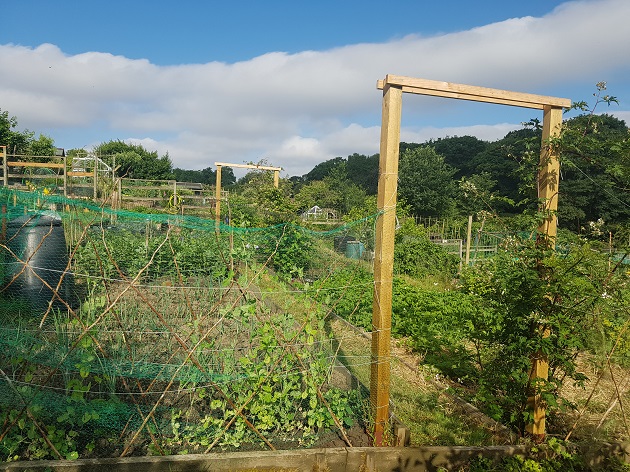 This is the best time of year on the allotment, everything is growing, including the weeds of course, writes ANNE AKERS.

But thanks to vigorous hoe-ing and my patented Whisk-Away-The-Weed™ workout, which exercises hamstrings as I bend over, shoulders as I pull up, triceps as I pull back and core as I pick myself up after falling over, it’s all looking rather good.

Everything is later than usual, thanks to the cold, wet spring, but things grow when they grow and won’t be bullied by the likes of me.

One of the greatest pleasures of allotmenteering is digging up potatoes and my second earlies are ready.

That miserable-looking potatoey lump planted weeks and weeks ago has thrown out leaves, flowers and tomatoes.

Well, they look like tomatoes, they are the same family, but they are not edible, so leave them alone and look underneath, that’s where the goodness is.

Some bright-spark super-gardener types have grafted a tomato plant on to a potato, so you get tomatoes and potatoes at the same time. The plants are expensive and of course you can’t grow them from seed, so why bother, eh?

There’s a technique to digging up potatoes, the best tool is a fork, stuck into the ground a little distance away. I do it gently to begin with so I can avoid spearing those precious potatoes.  Then the ground just keeps on giving, dozens and dozens, and within an hour there’s a panful on the boil.

Once cooked, all they need is a light crushing, butter, a sprinkle of salt and a torn mint leaf, it’s a meal in itself and tastes like nothing you can buy in any store. All that digging, planting, weeding and further digging is so worth it!

My strawberries were poor, with hardly enough to fill a bowl. I have two beds which I planted when I first started the allotment four years ago.

While they stay healthy and throw out runners which themselves have little strawberry plants on the end, the beds do need digging up (there we go with the digging again!) and re-planting to keep them disease-free and vigorous.

This recent dry weather is not the strawberry’s friend, either, they need a lot of watering, at the right time.

Fortunately, the raspberries are a blaze of gold and pink. I planted golden raspberries, which are beautiful to look at, with a slightly more delicate flavour than their pink cousin.

While strawberries throw out runners, which you can see above the ground, raspberries send out suckers underground, little mini canes that appear all over the place, I even found some among the potatoes. A quick tug, and they are out, or left to grow and transplanted.

Raspberries are either summer or autumn fruiting, which is self-explanatory.

Summer varieties fruit on last year’s growth, so when they’re full of fruit, you’ll already be able to see next year’s canes.

Autumn canes, if they are not pruned to the ground in the spring, (which I actually remembered to do) will fruit in summer and autumn, but not as prolifically.

There are also wild raspberries at the edge of woods and even roadside verges, watch out for them!

Lettuce and radish have grown, been eaten, and are growing again. Peas and beans should be ready soon, another vegetable that tastes infinitely better when grown in the allotment. It’ll be a little while before the onions will be ready, but I can be patient, allotmenteering is a game of patience.