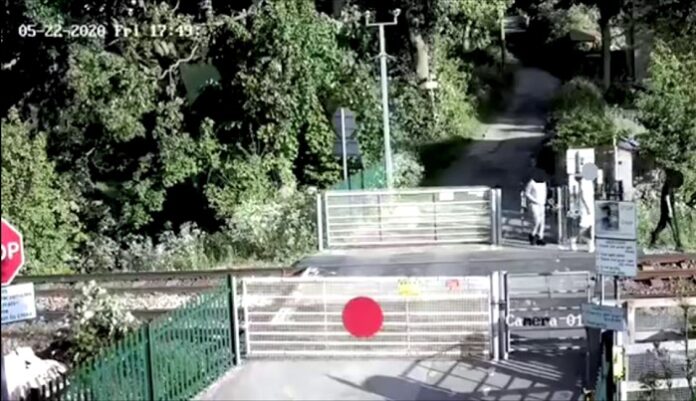 Network Rail is urging parents to warn their children about the dangers of trespassing on the railway as shocking CCTV footage shows three teenagers risking their lives by accessing tracks via a level crossing in Pudsey.

The incident occurred in May at Ducketts level crossing at the bottom of Daleside Road, in Pudsey, during lockdown.

Around 127 passenger and freight trains travel through this crossing each day at speeds of up to 60mph. They cannot stop quickly or swerve out of the way and you can never anticipate when the next one is due.

Network Rail dealt with 22 incidents at Ducketts level crossing in the last 12 months, including four children running in front of a train and a woman taking her daily exercise along the track.

This reckless behaviour delayed train services, some of which were being used by key workers to get to and from their jobs.

Other incidents have been reported at the level crossing over the past decade, including a terrifying near-miss with a cyclist in 2016, and a dangerous potential collision with a car in 2013.

Ducketts level crossing is a private user-worked crossing, meaning that anyone who is using the crossing’s vehicle gates without the correct permission, or anyone who walks outside of the clearly marked pedestrian access, is trespassing illegally and could face fines of up to £1,000.

Network Rail will be writing to those living near the crossing to remind them of how to use the level crossing safely.

“Trespassing is extremely dangerous, and the CCTV footage from Ducketts level crossing is shocking and incredibly worrying to watch. It’s never safe to hang around on the railway.

“It’s vital that we make young people aware of the dangers and the devastating consequences that trespassing can have by educating them, and by setting an example.

“We typically see a rise in trespass incidents during the school holidays, so please have a discussion with your children before it’s too late – as everyone loses when you step on the track.”

Network Rail, along with British Transport Police, runs a hard-hitting safety campaign, You Vs Train, which highlights the devastating consequences that trespassing on the railway can have.