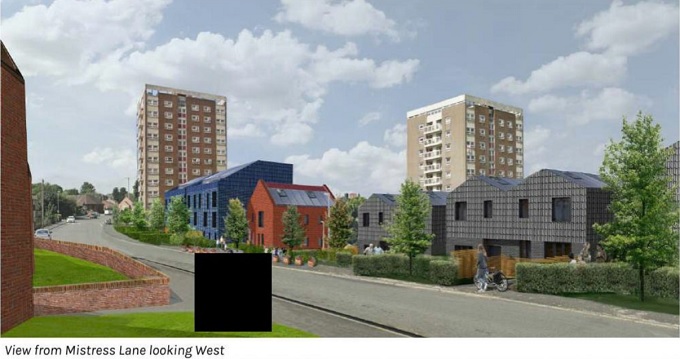 A groundbreaking project will create 34 new energy efficient and affordable community-led homes at a site in Armley which used to be occupied by council flats.

“Our aim with all our projects is to involve local people in the process of shaping their communities,” said Leeds Community Homes (LCH) development director Jimm Reed. “In this country we have a top-down system where big developers come in and design something for you, and you have virtually no say over how it looks and how it fits in with your community.

“Community-led housing turns this on its head. I believe housing should originate from the people who live there and it should be run and managed by those people.”

For those unfamiliar with their work, LCH is a community land trust which aims to create community led housing developments by acquiring land and buildings to be transformed into homes for affordable rental and sale.

Mr Reed’s passion for ‘people-powered’ housing comes through strongly during our conversation. Going back 20 years, he worked for a housing association and enjoyed the process, but always assumed there was another way of doing things.

This vision was fulfilled when he played a leading role in working with local people – including West Leeds-based environmental expert Professor Paul Chatterton – to get the Lilac co-housing community of 20 eco-build households in Bramley off the ground. He described the project as “a real eye-opener”, with “normal people wanting to create their own community with strong ideas and principles”.

The Armley project, he says, has the opportunity to lift the community around it, as well as create a new mini community run by its residents. It will be built to high environmental standards, and will be available as a mix of affordable rent and shared ownership.

So could community led initiatives ultimately become the driving force in the UK housebuilding industry?

Mr Reed feels there’s some way to go before that happens in the UK, but the idea is taking off across Europe, particularly in Germany. “It principle, there’s no reason why community led housing initiatives won’t continue to grow. It will depend on how successful we are in getting the message across to policy makers.

“We’re supporting a number of groups across Yorkshire to get their projects off the ground – there’s no lack of interest or willingness to make this happen.”

The Mistress Lane scheme has had a long period of design and planning, consisting of public meetings and extensive consultation with local people in shaping the proposals.

“We will continue to engage the Armley community – some of whom may be future residents – in co-creating the homes and spaces we are going to be making at Mistress Lane,” said Mr Reed.

A significant part of the funding for this scheme will be from ordinary people who invested in community shares in LCH at its launch in 2018. That issue raised over £400,000 and much of that investment will go towards the Mistress Lane scheme.

The LCH team are now a big step nearer to building the new homes and hope to be starting work on site by the middle of next year. “We’re not rushing it,” he said. “We’re in no rush to put out tenders in the current climate, due to Brexit and the pandemic. Talks are ongoing with the council to transfer the land and we need LCH to be registered as a housing provider.”

The site was previously occupied by council flats which were demolished in the early 2000s. According to Leeds-based architects Bauman Lyon the development will:

“… make a generous contribution to this area, including improvements to the street frontage, rich and engaging publicly accessible spaces and a new flexible community space for a variety of local meetings and functions.”

The proposals were first submitted in April 2020. Weather-proof Photovoltaic panels, which convert light into electricity, will be embedded to form part of the roofing on the properties.

A significant part of the funding for this scheme will be from ordinary people who invested in community shares in LCH at its launch in 2018. That issue raised over £400,000 and much of that investment will go towards the Mistress Lane scheme.

LCH also has one eye on a scheme to build flats in the city’s climate innovation district down by the Royal Armouries Museum and Leeds Dock, and will likely be hosting a second community shares scheme in the future.

“The people who invest are just normal Leeds people,” Mr Reed added. “They perhaps have children and are worried about how they’re ever going to get onto the housing ladder.

“We want to do at least one project a year, but we are going to need more investment.”

In the meantime, anyone interested in getting involved with the Mistress Lane development – or with LCH in general – is welcome to e-mail info@leedscommunityhomes.org.uk.