West Leeds: ‘Start of the conversation’ for new transport network 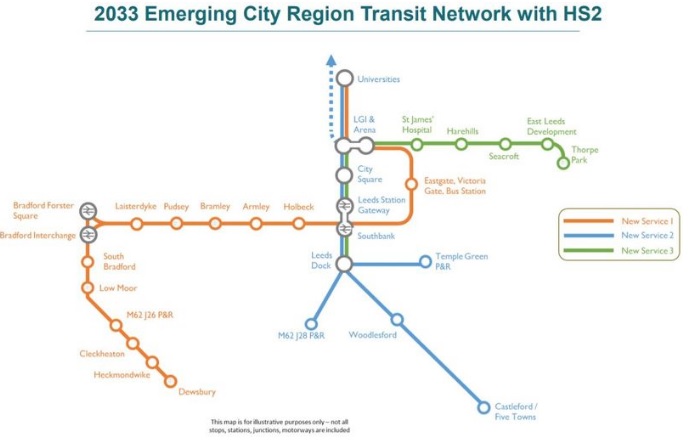 Senior members of Leeds City Council have admitted there is still some way to go before West Yorkshire is ready for its own mass transit system.

It follows plans released earlier this month by West Yorkshire Combined Authority (WYCA) to brand three new mass transit lines in the district over the next 15 years – including one potentially cutting through West Leeds.

It would feature a route that could run from Leeds city centre to Holbeck, Armley, Bramley and Pudsey before heading into Bradford and North Kirklees, ending at Dewsbury.

Members of Leeds City Council’s executive board met this week to discuss a report into the plans, which are hoped to arrive alongside the proposed Leeds leg of HS2 rail system, which is expected in 2032.

“I simply look at the Leeds-Bradford route. There are routes that desperately need more than just a bus network, and this report sets those up.”

WYCA released a London Underground-style diagram of the proposed lines, which would link Leeds city centre with Bradford via West Leeds, the Spen Valley, Castleford and east Leeds. It is not yet known what form such a transport system would take.

“It is to be welcomed. It is titled a ‘Leeds city region’ connectivity strategy, but if you look at the diagram it is a West Yorkshire strategy.

“A lot of people – and an increasing number of people – travel from the north of the city into Leeds to work. Yet there is no mention of this.

“To call it a city region strategy is something of a misnomer, we need to go further than that. Many people live north of the city and will be travelling into Leeds to work.”

“This plan is ambitious and it is what people want. We have to show we want to change things for the better.

“It’s a long time since David Cameron came to Headingley and said Yorkshire people fall out with each other all the time.

“It will engage people.”

“This comes on the back of one of the biggest consultations we have had with the people of Leeds.

“The response we are getting picks up on the fact there is some way to go.”

The plans follow the scrapping of the proposed £250m Leeds trolleybus scheme in 2016.

A report to executive board members stated:

“Mass transit vehicles are anticipated to be required to meet the capacity need in delivering these new city region transit network services.

“This is only the start of the conversation. Through the conversation with stakeholders and the public as well as through the development of the business cases, other modes such bus rapid transit or tram-train will continue to be assessed and may be more suitable for example, where there lower levels of capacity are required or where there is direct interface with the heavy rail network respectively.”