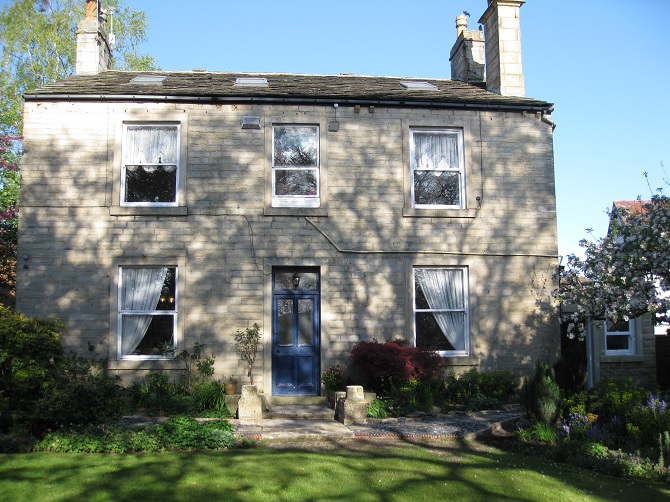 by Elizabeth Bee and Michael Meadowcroft

Many of Bramley’s fine old houses have been demolished over recent decades – but Waterloo Lodge has survived to celebrate its 200th anniversary this year.

As an impressive Georgian house, it is alone in this part of Bramley and the only other individual building of distinction is Lincroft House which is a positive youngster, dating from only the mid 1840s.

Before Waterloo Lodge was built, the area north of Town Street was largely farmland – and the mills and tanneries were only just arriving.

The Public Record Office map of Bramley in 1811 simply shows numbered fields, sometimes with names. Not surprisingly, given that the famous battle was in 1815, there is no Waterloo Lane.

It is interesting that even now many of the small roads around Waterloo Lodge and Lincroft House follow the boundaries of the earlier fields.

Waterloo Lodge was originally the mill house for Waterloo Mills – always plural because there was more than one building on the site, probably for different processes in the production of cloth – and there is evidence that the house originally had a role in the management of the mills, including the payment of employees.

A key document for Bramley local history is the diary of Joseph Rogerson who lived at Prospect House on Broad Lane, in the top left corner of the accompanying map.

Rogerson was himself a wool man and his brother, John, dealt in Bramley stone. He records on 19 October 1813 that “it is said John Haley staked a millstead out in LingCroft yesterday,” and this is the first reference to what became Waterloo Mills.

The John Haley referred to was a member of the most powerful family of the day in Bramley.

The Haleys owned a great deal of property, both residential and industrial, in the village and over the years their financial status swung from wealth to bankruptcy and back again!

Haley’s Yard still exists towards the end of Upper Town Street next to Bramley Park and it is the only example remaining of the many yards that abutted on to the whole length of Town Street.

The Haley family played a role in Leeds civic life up to and during the 1930s when William Haley was a city councillor for Bramley through to the Second World War.

The victory over Napoleon in 1815 at the town of Waterloo was a momentous occasion and many British streets and buildings commemorate the battle.

Haley was caught up in the celebrations hence Waterloo Lane, Waterloo Mills and Waterloo Lodge – as were also Thomas Stead, Isaac Haley and John Barker who in 1823 built Wellington Mills nearby, on Broad Lane.

The first separate reference to what became Waterloo Lodge dates to a deed of 3rd February 1818 between the owners of arable land amounting to “3 acres, 3 roods” at Little Clark Close and Mark Smith for the latter to have “tenure or occupation” and to have the right to “pass and repass on foot, on horseback etc for all purposes and on all occasions …. along the new road at the south end of said close and from the other new road …. leading from there into the Town Street of Bramley.”

The construction of the house clearly took a little time as the first reference to “Waterloo Lodge” showing its location, plus outbuildings, comes in a map of 1821, for which the surveying would have been done during the previous year.

Why it was called a “Lodge” is a puzzle given that the name usually indicates a smaller building serving a much larger main house and this is clearly not the case in this instance.

On the same map Waterloo Lane is shown as wide at the Town Street end and narrowing to the original footpath north of the house.

The fact that the lane ended at the house is the reason for the drive and gate being at an angle to the present thoroughfare.

At the time the horse-drawn carriages went down the side of the house and then turned round. The house itself faced east and the side at the end of the present drive and the yard is, in fact, the rear.

The house has two main storeys on its south side but three in the north west quarter, with corresponding lower ceilings. This arrangement, plus the cellar, was to provide for the servants’ living and working accommodation.

In 1823 a complete valuation survey was undertaken of the township of Bramley in order to assess each property’s liability for rates. The survey lists “House, back part, Cellar, Factory of 3 Stories, Stable, Mistall, Garden and Yard etc, with cottage and Cellar plus Foot Gate Close as covering 3 acres and 3 roods approx.”

Note that the original “Little Clark Close” now apparently has the alternative name “Foot Gate Close”. As a consequence of the survey the Bramley Rate Book of the same year shows “house, shop and land” valued at £12 and 15 shillings – over £1500 in today’s money.

Mark Smith was the son-in-law of John Haley and this, plus the two of them being Methodists which may well be what brought them into the original partnership for the mills and the house.

But, after almost ten years of occupation, in 1830, Mark Smith sold the house to Joseph Haley.

The deed of sale lists “arable meadow or pasture ground situated and being in Bramley aforesaid commonly Little Clarke close …. 3 acres, 3 roods …. and now or late in the occupation of the said Mark Smith and also all that messuage or dwellinghouse with the Warehouse, Weaving Shop, Stable and other outbuildings lately erected by the said Mark Smith upon some part of the said parcel of land.” Mark Smith thereafter disappears from the scene.

Following their purchase, and at least for some time into the 1840s Joseph Haley, his wife, Jane, their three children, John, Louisa and Lavinia, plus one servant, all lived in the house until the family went bust in 1841 and then, later, in the financial depression of 1848, had to negotiate a sale of all the mill’s contents.

Following this Mark Smith gave up the wool trade and became master of the Bramley Workhouse.

The house, including four cottages to the north were sold to the Yorkshire Banking Company (which eventually, in 1901, became part of the Midland Bank).

The Haley family continued at Waterloo Lodge as tenants of the bank until the link between the mills and the house was severed by the bank selling the house to John Westmorland Ellis, described as a “Gentleman”, ie he lived on his investments and did not have to work!

The following year Westmorland Ellis died aged just 31 but his widow, Ellen, continued to live there until her death in 1881, and their son, Henry, remained there until 1901.

Originally, at the time the mills and the house were being built the Haleys owned all the land down to Broad Lane and across to Lincroft House but later, as the different owners got into financial difficulties, plots of land were sold off, the last parcel being sold in the 1970s for the modern bungalow on Landseer Grove.

It is also possible that the short terrace, Westmoreland Mount, further down Waterloo Lane, was built as an investment by the Ellis family, certainly Henry Westmorland twice raised mortgages of £500 – equivalent to £65,000 today – on Waterloo Lodge.

As for the mills, the progressive firm of J T and J Taylor of Batley took them over in 1914. Taylors were the pioneers of worker involvement and profit sharing.

They ran the mills until 1925 at which point their use for the woollen trade ceased and for some time a firm making and selling cold meats was based there as were firms of dry cleaners. Later it became a home for a number of small businesses until the mills were demolished around 1960.

At some point during their occupation of Waterloo Lodge, the Ellis’s made considerable changes to the house.

In effect they Victorianised this Georgian house. They changed the windows from the smaller panes to the style that exists today, they installed the attractive mosaic floor in the hall, they created an ornate frieze in the dining room and, somewhat bizarrely, because they wanted to have a Victorian back door but could not do so because of the huge Georgian hinges, they bolted a Victorian door on to the original Georgian example, in effect creating a “sandwich”!

All this was all done quite tastefully but in fact it spoiled the architectural integrity of the house.

Henry Westmorland Ellis died in August 1916, but from directories and censuses it appears that lodgers occupied parts of the house in the later years.

In particular The Bolton family resided at Waterloo Lodge from 1911. William Scriven Bolton (1888-1929) who was the son of the main tenants, was a distinguished astronomer who contributed original research to specialist journals and received medals and diplomas from distinguished international exhibitions.

He built a large observatory alongside Waterloo Lodge – on the site of the present 74 Waterloo Lane – which he left to Leeds University in his will. The University removed it bit by bit but, over the subsequent years, has managed to lose it!

During and immediately after the Second World War a number of families lodged at Waterloo Lodge until it was bought first by the Dawson family in 1951 and then in 1956 by the well-known and popular Dr Marshall.

We bought the house in October 1981. Over the years we have improved the house in a number of ways, always seeking to respect, and even restore, its integrity. The story of our work on the house is available in a separate paper.