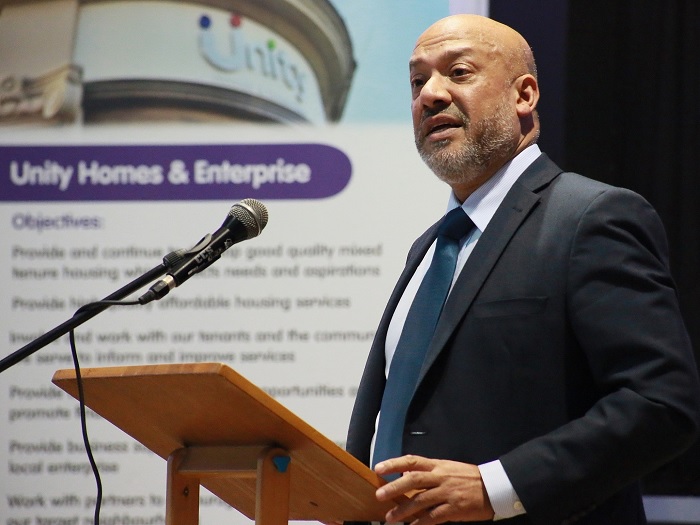 The Government can only truly “level up” the country after the Covid-19 crisis by rejecting austerity, investing in communities and building many more genuinely affordable homes, the Chief Executive of a BME housing association has argued.

Unity opened a £2 million affordable housing development on the site of the former Ancestor pub in Armley last May. It also has housing in Pudsey.

Speaking at a webinar on the housing and health implications of the virusm Ali Akbor said the pandemic had graphically highlighted social disadvantages faced by BME people in the UK and elsewhere.

“Neighbourhoods with a high concentration of BME residents are often plagued by acute levels of social deprivation which impact on people’s health.

“Many of these areas suffered particularly badly because of austerity measures introduced after the financial crash.

“BME families often live in overcrowded properties and there was little new money for affordable family homes during the austerity years.

“The coronavirus outbreak has rightly led the Government to find tens of billions of pounds to support businesses and workers – resources that were previously unheard of.

“But worrying times lie ahead in the UK including a recession, which the Chancellor of the Exchequer has already conceded will happen, and a likely surge in unemployment.

The Unity Chief Executive, who received an OBE in the New Year Honours for services to the community in Leeds, said that if previous UK Governments had injected major targetted funding to address inequalities, the country and its people would not be living with the disparities we see today.

And he highlighted the current Government’s decision to release £6.4 million to provide emergency accommodation for 90% of rough sleepers at the start of the lockdown as “a prime example of what should have happened long ago.”

“Boris Johnson must keep his pre-election pledge to ‘level up’ society.

“The most deprived areas should be a funding priority as the nation emerges from lockdown.

“We need significant investment in local communities to protect those individuals and families most at risk of being left behind, socially and economically.

“This must include a commitment to place the building of many more genuinely affordable homes placed at the top of the Government’s post-pandemic ‘to do’ list.

“Austerity cannot be used as an excuse for health and financial inequalities ever again.

“The economic recovery has to be for everyone.  People of all ethnicities must feel they have a stake in the brighter future that hopefully awaits.”

Unity Housing Association was formed in 1987 with the objective of building a strong, BME-led, community housing association to address the needs of black and minority ethnic communities in Leeds.