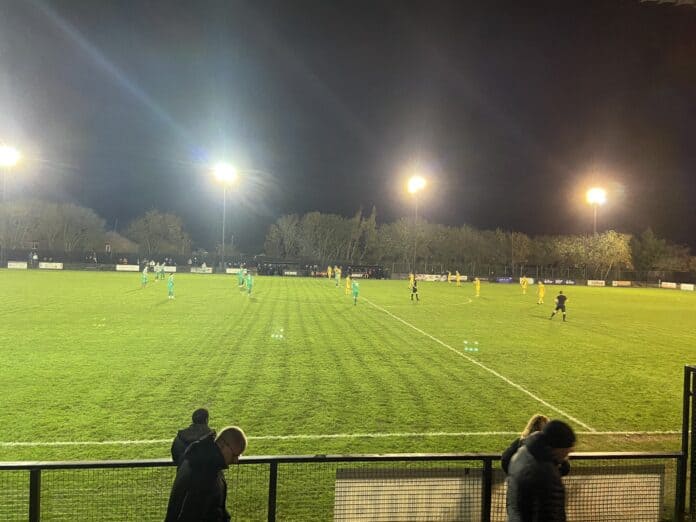 Farsley Celtic finished the night with eight men as they lost out 2-0 to play-off chasing Chester FC in a feisty encounter at the Citadel.

Kian Scales was sent off for a late studs up tackle on Joe Lynch before Tom Allan and Isaac Assenso were given second yellows for dissent – the latter’s coming after the final whistle.  Goals from Kole Hall and Kurt Willoughby were enough to seal the victory for the visitors.

Farsley started the brighter of the two teams in a goalless first half. Frank Mulhern had been denied by the Chester keeper when through on goal, and Luke Parkin then skimmed the bar.

The home side even had a goal from Frank Mulhern ruled out. The ball was initially crossed in by Chris Atkinson and after a goalmouth scramble Mulhern turned the ball in but the referee ruled that there had been an offside in the melee.

Celtic’s best chance came minutes beforehand when a pinpoint corner from Bobby Johnson landed on the foot of Carlton Ubeazuono who somehow managed to side foot volley the ball over the bar and out of the stadium from inside the six-yard box.

The missed chances were to prove costly.

As the game hit the second quarter Chester started to overrun the Farsley midfield and it was only the saves of Max Dearnley that prevented the away side breaking the deadlock.

Firstly, he was forced to dive high to his right as a low cross from Kole Hall was volleyed into the top corner by Adam Thomas. Thomas was involved again as his cross was taken down by Kurt Willoughby, who shot low into the left corner but was thwarted by a smart save by the Farsley stopper.

Farsley again started the half brightly and carved out a number of good opportunities. The long throw of Tom Allan was particularly dangerous and provided two great chances for Ubeazuonu. But all the makeshift forward could do was glance a header wide with his first and then shortly after hit an acrobatic overhead volley straight at the Chester goalkeeper Harry Tyrer.

Chester finally made pressure pay in the 68th minute when Kole Hall broke the deadlock.  An overhit cross fell to Declan Weeks, who did well to find space and get a second cross into the box which was just out of reach of the flailing Max Dearnley at the front post. The ball fell to Hall who made no mistake as he rifled it home, much to the delight of the travelling contingent of Chester fans behind the goal

The major boiling point of the match came ten minutes later when Kian Scales was shown a straight red for a late, two-footed challenge on Joe Lynch. The tackle sparked a confrontation between the two teams with plenty of players pushing and shoving each other.

Down to ten men, Farsley were forced to change from five to four at the back which opened up space for Chester and led to their second goal with nine minutes to go. Kurt Willoughby nipped in behind the Farsley defence to latch on to a lofted pass before driving into the box and blasting the ball past Dearnley,  sealing the three points for Chester.

Controversy came in the final minutes of the match as an already depleted Farsley Celtic squad lost two more players to red cards. Firstly, Tom Allan was shown a second yellow for what appeared to be dissent against the linesman on the far touchline, angering the already frustrated home fans.

Isaac Assenso, who came on as a second half substitute, was also bizarrely shown his second yellow card for a similar offence as the players walked off the field after the final whistle had blown.

Defeat sends The Celts down to second-bottom in the National League North, three points from safety.

The Celts now have a 10-day break, and a chance to regroup, ahead of a return to action in the league against Peterborough Sports on Saturday, 3 December (12.30pm kick off).

Celts boss Russ Wilcox refused to criticise referee James Bancroft. He was left to rue early missed opportunities and his team’s ill discipline, but praised his players’ commitment and application.

Chester FC’s Twitter admin may have had better days:

Farsley Celtic have been drawn at home to Chester in the Isuzu FA Trophy third round. Third round ties are scheduled for Saturday, 17 December.

The Celts reached this stage of the competition with a 2-1 victory over local rivals Bradford (Park Avenue) on Saturday, whilst the Cestrians defeated Lancaster City 2-1.

Ticketing details will be announced in due course.

The full third round proper draw can be viewed by clicking here.