West Leeds residents have identified what they believe are the most dangerous stretches of road in the area.

These include Kirkstall Road, Stanningley Road, Armley Town Street – where a woman was run over and hospitalised three days before Christmas – Broad Lane in Bramley and Leeds Bradford Road.

The roads were identified in a survey – completed by 511 people last year – which was run by Leeds West MP Rachel Reeves..

Ms Reeves is demanding urgent action from Transport Secretary Chris Grayling and local roads chiefs to cut the number of deaths and serious injuries on the city’s roads.

According to Department for Transport statistics, there were 269 casualties on roads within the Leeds West consitutuency including one death and 34 serious injuries.

Following mounting concerns from her constituents about speeding motorists and dangerous driving, Ms Reeves carried out the survey to investigate the problems and look at possible solutions.

An overwhelming 95% complained that they “often see speeding in residential areas” and revealed serious fears about drivers breaking the speed limits on local roads.

There were also reports of speeding and anti-social driving around schools and in existing 20mph areas.

When it came to possible solutions, greater enforcement – particularly measures such as new speed cameras, lower speed limits and a greater police presence – was the most favoured option of people in Leeds West.

Ms Reeves insisted transport leaders should dramatically extend the number of 20mph zones to improve road safety for everyone in Leeds. She said:

“My survey reveals mounting fears among local residents about speeding and dangerous driving on our roads.

“We need urgent action to improve safety for pedestrians, drivers and cyclists to cut the unacceptably high level of deaths and serious injuries.

“A tiny minority of reckless drivers are an absolute menace, particularly those who break the speed limits around schools. We need tougher enforcement action to deal with them.”

She called for more 20 mph speed limits in West Leeds and added:

“Cutting speed limits on our roads will save lives and make our streets far safer for everyone who uses them. In other local areas, 20mph zones are now the norm and are saving lives. We need more action on this in Leeds West.”

“Lower speeds reduce the numbers of devastating casualties on our roads, and 20mph is widely acknowledged as the safest speed for places where people work, live and play.

“We are calling for a reduction of the national default 30mph limit in urban areas to 20mph and welcome Ms Reeves’ support.

“Slower speeds save lives and help make our streets more liveable environments, encouraging people to walk and cycle which is great for public health.

“We hope that the Government and local council chiefs take note and act to make our roads safer for everyone.”

Ms Reeves has already written to Transport Secretary Chris Grayling, other transport leaders and West Yorkshire Police and Crime Commissioner Mark Burns-Williamson to urge them to support her campaign to improve road safety.

The Leeds West MP also recently met representatives of road safety charity Brake to discuss the results of her survey and is supporting their campaign for a reduction in the national speed limit from 30mph to 20mph on urban roads.

West Leeds Dispatch featured concerns about speeding on Broad Lane in Bramley last summer. Our own poll, completed by 147 people, suggested a split opinion on the speed limit: 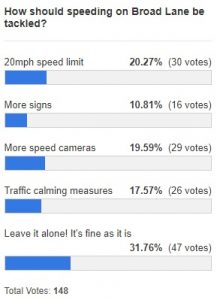