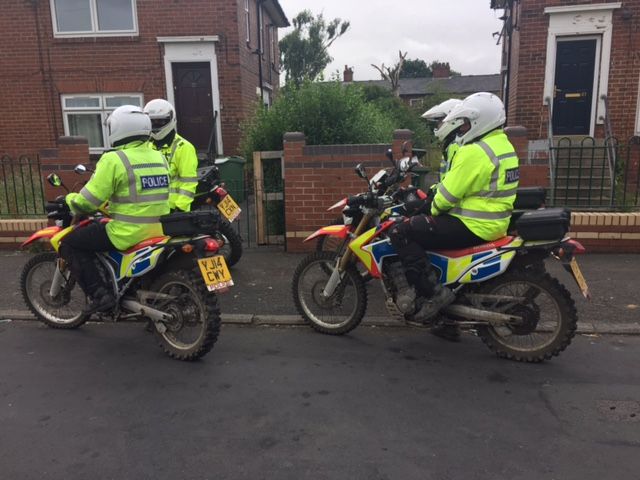 Anti-social use of off-road motorcycles is spreading through Leeds “like a cancer”, a councillor has claimed.

A meeting of senior councillors and police officers today heard how those riding the vehicles on streets late at night were blighting the lives of people living in certain areas of the city.

The Dispatch has recently highlighted problems in Armley, Calverley, Farnley and Hawksworth Wood.

The comments came during Leeds City Council’s environment, housing and communities scrutiny board, when it was also claimed that the number of police pursuits doubled in the space of just one year.

It follows a report from council officers, which claimed there was an issue with off-road vehicles – such as quad bikes and trial bikes – street-racing and “performing stunts and tricks” in certain Leeds communities.

Responding to the report, Coun Javaid Akhtar (Lab, Little London and Woodhouse) questioned whether the council and police had the resources to adequately deal with such problems.

“Our communities are facing the heat at the moment. Imagine living in an inner-city council estate with all the motorbikes, drug-dealing and anti-social behaviour going on right outside your doorstep.

“When you have families living in a council estate and you have these off-road bikers, day-in-day-out going around in your estate at unsociable hours, it is not fair on those communities.

“Communities are suffering in a big way at the moment – and the off-road bikers is becoming like a fashion – it is spreading like a cancer across the city.

“Yesterday I was in Killingbeck – four guys with motorbikes, without helmets, were basically ruling York Road, and these behaviours are what we are seeing day-in-day-out, and it must be stopped.”

It follows a report into road safety in the city, which also stated the number of people killed or seriously injured on Leeds roads had increased from 304 in 2010, to 337 in 2018.

“I don’t think there is any escaping the fact that the figures since 2010 must in some way reflect the massive reduction in police resources.

“We can provide road safety, introduce traffic calming and have 20mph zones, but at the end of the day, there is a core of motorists who really will only ever respond to robust enforcement by our police colleagues, and I appreciate how difficult it is to provide that resource.”

He added that mobile speed cameras should be deployed more often.

An officer speaking on behalf of West Yorkshire Police told the meeting that a steadying of KSI figures since 2014 may have been due to increased vehicle safety.

“Over the last 10 years, car-build quality and safety features have increased and saved a number of lives.

“If people were driving today in cars that were 10 years older, the figures would be higher – this concerns me even more.

“It would be very easy for me to say there is a direct correlation between 2010 and the reduction of resources and the increase. I have no evidence to support that, but my personal notion is that people’s driving behaviour changes when there is a higher police presence.

“We are getting more officers more visible.”

He added: “One of the things I do acknowledge is that, in 2018, we have had double the amount of pursuits [than the previous year], and that’s partially because people are not wanting to stop for minor offences, and that people will take a chance when they are in high-powered cars.

“When you look at the type of collisions, you can’t escape the fact that a lot of these collisions have criminality associated with them.”