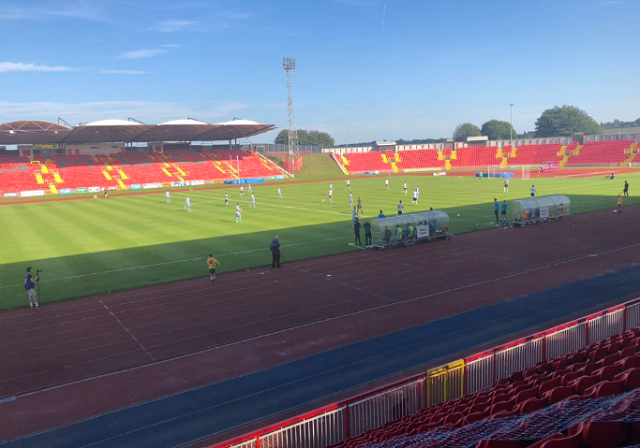 Farsley Celtic made it back-to-back wins with a superb 3-0 victory away to the previously unbeaten Gateshead, writes Thomas Ritchie.

Second-half strikes from Jimmy Spencer, Luke Parkin and Tyler Walton saw the Celt Army earn a terrific three points, and make it 10 points from six games to start the season.

Farsley Celtic Manager Adam Lakeland was delighted with his side’s performance, as he said:

“I thought we thoroughly deserved it (the win) to be honest.

“I think the first 10, 15 minutes, we allowed them out to get out too easily which we anticipated to an extent because of the way I’d set us up today, but I felt the longer the first-half went on we kind of grew into the game.”

Lakeland was also extremely pleased with the impact Luke Parkin had. He added:

“When he’s come on (In previous games) he’s looked sharp, and he’s trained really well and today I felt it was the right time to put him in with the way we set the team up, and I thought he was outstanding.”

The hosts started on the front foot, and they were inches away from breaking the deadlock six minutes in when Greg Olley picked the ball up on the edge of the box and rifled his strike against the crossbar.

The Celt Army were then denied by the upright midway through the first-half, Tom Allan heading Will Hayhurst’s delivery back across the goal to Jimmy Spencer who headed against the upright from six-yards out.

Minutes later Gateshead were thwarted by the woodwork for a second time in the first-half, Nicky Deverdics whipping in a cross for JJ O’Donnell who could only direct his header onto the post.

The Tynesiders then had another fantastic opportunity as they countered from a Farsley corner through Josh Kayode, but he decided to go it alone with options to his right, and fired comfortably over from 20-yards out.

Six minutes after the interval Farsley took the lead with a devastating break, resulting in Nathan Cartman threading the ball through to Jimmy Spencer who slammed home from inside the box.

The North East outfit had a terrific chance to equalise with 20 minutes remaining, JJ O’Donnell crossing for Olley who was unable to keep his header down when he really should have scored.

Farsley then doubled their lead thanks to great work from Nathan Cartman once more, the diminutive forward holding the ball up on the edge of the box and squaring for Luke Parkin to drive home, with what proved to be Parkin’s final touch before being replaced by Tyler Walton.

Gateshead were given a lifeline with just over five minutes to go, substitute Dom Tear going down in the box and winning his side a spot-kick.