The redevelopment of the former Kirkstall District Centre site has moved a step closer to reality after council chiefs rubberstamped the sale of the land for an undisclosed sum of money.

As revealed by the Dispatch in July, Artisan Real Estate want to buy the land from owners Leeds City Council and Tesco and transform the mostly derelict area into about 266 apartments and 35 town houses.

A full planning application is expected in March 2019.

Council officers have now approved the sale of their land for a ‘confidential’ amount of money. 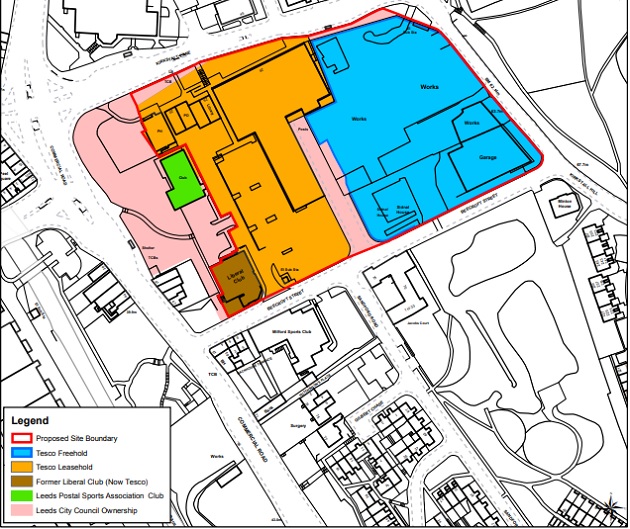 Artisan also agreed to buy the land from Tesco – who had originally wanted to build a supermarket on the site – in September.

A council report approving the land sale is positive about the scheme, which it says would also include a small amount of commercial space at the junction of Kirkstall Lane and Kirkstall Hill, opposite a newsagent and a number of takeaways. The report adds:

“There is an opportunity for this junction to become a focal point for retail/service provision targeted towards the local community and therefore serving a different market to the larger retail space to the west of the A65.”

The report says there is no benefit in the council retaining a long term interest in the site and adds:

“This scheme is a positive step forward to securing the redevelopment of the Kirkstall District Centre site and the Kirkstall ward members are supportive of the progress which has been made to date given the positive impact that this will have for Kirkstall.”

Access to the development, which will be targeted at young professionals, would be from Beecroft Street.

Artisan, based in the Isle of Man, held a public meeting in Kirkstall in November about the potential they see in the site, their possible solutions for transport links and engineering and about their other developments. The council report says feedback from the meeting was positive.

The council’s report can be read in full here.