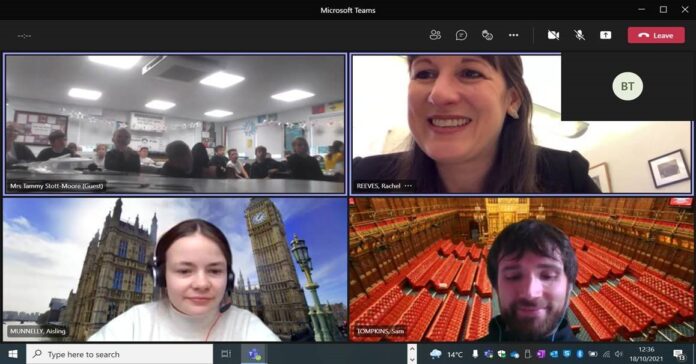 Everyone was shocked by the terrible events surrounding the death of Conservative MP Sir David Amess as he carried out a regular surgery to help his constituents.

Since I became an MP in 2010, I have always held surgeries to help my constituents in Leeds West and had my most recent one in Bramley Library.

They are a vital part of an MP’s work and I always enjoy meeting people and hearing them talk about the issues that affect them and their families and communities.

I am determined to continue with these surgeries and want to reassure people I will always be on hand to listen to their concerns. However, on the advice of West Yorkshire Police, these meetings may be held in future over the telephone or via Zoom calls, rather than face-to-face.

You can always contact my office with any concerns or queries at rachel.reeves.mp@parliament.uk or by calling  0113 255 2311, and my team will be happy to help.

I was delighted to join fellow Leeds Labour MPs, our mayor Tracy Brabin and trade unions from across Yorkshire in speaking out against the disgraceful practice of firing and rehiring workers on worse pay and conditions.

I know this affects many people in Leeds West, as well as across the country, and it is not acceptable.

Labour tried at Westminster to bring in a new law to end this practice, but it was blocked by the Government who preferred to side with bad bosses instead of workers and decent employers.

If you’ve been affected by fire and rehire, please do not hesitate to contact my office for support.

I enjoyed joining a fantastic Q&A session with Year Four pupils at Stanningley Primary School, who had taken part in a virtual tour of Parliament (photo above).

I was really impressed by how enthusiastic the students were, and how much they cared about local issues.

They asked lots of very thoughtful questions on everything from global warming to improvements to Stanningley Park, and how laws are made. I look forward to us working together to ensure Stanningley Park meets the needs of our local community.

Helping Those With Financial Problems

I’ve been in touch with Leeds Debt Advice Network, Citizens Advice Bureau, Better Leeds Communities and other organisations regarding changes to the ways that debt advice services are funded.

The changes will have devastating effects on these services, debt advisers and on the vulnerable people who rely upon them more than ever after such a difficult 18 months.

Along with fellow Leeds MPs, I have written to the Department for Work and Pensions to escalate the concerns of these organisations who do such vital work for those in our communities who are often in dire financial need.

The use of debt services has increased hugely during the pandemic and is likely to do so again in the coming months as families feel the effects of the ending of the furlough scheme and the cuts to Universal Credit. It is essential that these vital services are protected and I will be doing all I can to support them.

Just minutes before he was due to respond to the Budget, Keir Starmer found out he had contracted Covid.

So, he asked me as Shadow Chancellor to step in and deliver Labour’s response to the Budget – a job traditionally done by the Labour leader.

While it was a great personal honour for me, it was hugely disappointing to see how the Government’s financial blueprint yet again failed to deliver for my constituents.  Chancellor Rishi Sunak wrongly claimed that Leeds West would benefit from some extra funds.

Those funds are going to Pudsey. However, as West Yorkshire Mayor Tracy Brabin pointed out, the funds are money that would have been expected in any normal spending round for maintenance and pot-hole repairs – typical of the Tories’ smoke-and-mirrors Budget.

I will continue to fight for the funds we need to improve our local services.

Having read Rachel Reeves’ monthly column this morning, I feel I must comment on the inaccuracies, and I want to comment particularly on the Connecting West Leeds Levelling Up bid that was successful in the Budget.

She correctly points out that the scheme is in the Pudsey constituency, not Leeds West. The fault for calling it West Leeds lies wholly with her own City Council. They labelled the Levelling Up bid “Connecting West Leeds”, although the contents of the bid were what were suggested by Stuart Andrew MP and myself, with the support of Councillor Amanda Carter, and Councillors Shemilt, Collins and Taylor in Horsforth ward, and also the support of the three Pudsey ward councillors.

So when the Chancellor announced the funding in the Budget, he used the name that had been advised to him by Leeds City Council!

Rachel Reeves goes on to repeat a nonsense statement from the West Yorkshire Mayor, Tracy Brabin, that it has got something to do with pothole money.  I would suggest to Mayor Brabin that before she comments on things she clearly knows nothing about, she should get her officers to brief her on the difference between money allocated from a large capital spending pot, i.e. Levelling Up, and the money given out by the Government to help councils keep the roads maintained.

Incidentally, the money given by the Government to Leeds this year for that purpose was around £5 million, which more than replaced the cuts made by the Council of £3.5 million.

From the Bramley RLFC Archives: Remembering Eddie Webb, who took part in the D-Day landings