Pudsey: Meet the ‘knitters and natterers’ behind this stunning woollen Remembrance tribute 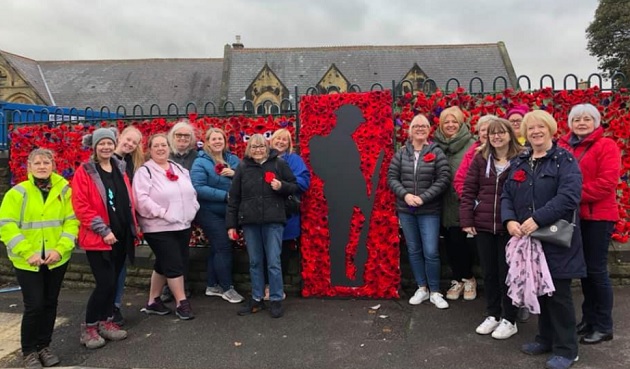 Inspired by recent centenary Poppy displays – a group of talented crafters from Pudsey have clubbed together to produce their own stunning woollen Remembrance tribute, writes Damon Sugden.

Starting just over a year ago the “Knit and Natter” group have been meeting regularly in the Royal Hotel, Pudsey to work on their crochet and knitted poppy display and socialise at the same time.

Their work is now on display, in time for Remembrance Sunday, around Pudsey along with the lamppost poppies supplied by the Royal British Legion and a separate display at St Andrew’s Methodist Church.

Visitors to Pudsey Cenotaph this Sunday (and for the Armistice service on Monday 11th) will be greeted by an amazing display of knitted poppies adorning the railings of Greenside School and the 147 Sports Bar balcony.

Further stunning poppy displays by the group can be found at the Royal Hotel in Station Street, Pudsey Bowling Club memorial, Mahoney & Ward on Robin Lane and the gateway of Pudsey Cemetery.

Additional poppies have been added to the lectern legs of the Pudsey Cenotaph “missing names” memorial. More than 13,145 poppies have been crafted for the displays for their tremendous Remembrance tribute both to the fallen, their families and everyone from Pudsey who served.

“Proud to have been part of Pudsey poppy group they look amazing now they are displayed.”

“I feel so proud to have played a small part in this beautiful display, all the knitters and crocheters and crafter’s deserve a huge pat on the back. As the main organiser Lisa you are a marvel in all you do, Pudsey can be so proud of you in all you do for us. THANKS x”

“Greeted with a Fantastic sight as I walked passed Greenside school in Pudsey as a group of volunteers were covering the railings with hundreds of hand knitted poppies,, Top Job EXCELLENT well done you lot 👏👏👏👏👏👏👏👏👏👏👏👏👏👏”

West Leeds Dispatch caught up with group founder Lisa Farrar to ask her about the stunning work that the display so proudly showcases:

> (WLD) “What prompted you all to band together for this amazing project?”

> (Lisa Farrar) “I first saw the amazing display on an Otley church and thought Pudsey should have something similar for our fallen soldiers.

“So I posted on Pudsey Born and Bred to see if there was any knitters out there who would like to contribute creating a display for Pudsey. Lots of ladies were interested and then we got together to start the project.”

> (WLD) “I know there were lots of initial ideas about the display and possibly having it in one place – are you pleased with how the display now looks across the final sites?”

> (Lisa) “Because it was on Otley church straight away I thought it would look lovely on Pudsey Parish Church as it’s a fantastic church. But unfortunately it wasn’t to be. So we decided on alternative sites which was Greenside School and 147 Sports bar, who were more than happy to display them.

“We were then asked by The Royal for a display, Mahoney & Ward and Pudsey Chapel and Cemetery. So we created displays for these additional sites. Including the large poppy for Pudsey Bowling club.”

Lisa would like to offer thanks on behalf of everyone from the group:

“I’d like to thank the Royal Hotel for letting Knit and Natter use their facilities over the past year.

“I’d also like to thank any knitters and crocheters, who have contributed to creating the display. I couldn’t have done any of the displays without them!

“Also like to thank C S Locks and Keys for supplying wool, storing poppies and donating £200 to The Royal British Legion Poppy Appeal.”

Last year Lisa was a West Leeds Dispatch Good Egg award winner for her selfless work in tidying the streets of Pudsey.