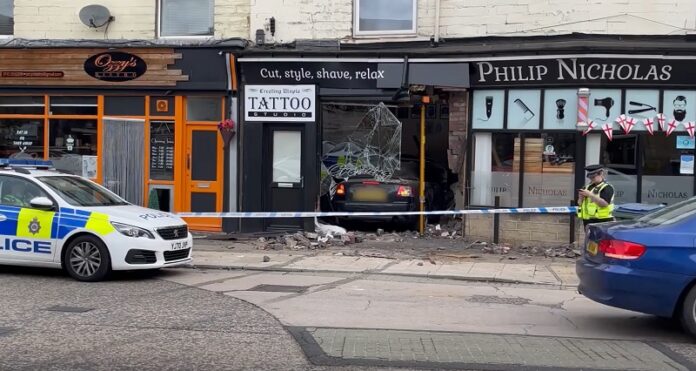 A Pudsey man has been arrested after an Audi car crashed into a shop at Stanningley Bottom in the early hours of this morning.

Police and crews from Stanningley, Bradford and Cleckheaton fire stations were called to the scene of the incident at the Creating Utopia Tattoo Studio at about 3.30am.

Police said the driver ran away from police after the crash but was later arrested on suspicion of drink driving, assaulting police and failing to stop.

A spokesperson for West Yorkshire Police said in a statement:

“At 2.29am last night, police patrol sighted a black Audi A4 on Richardshaw Road, Stanningley.

“The vehicle failed to stop for police and was then involved in a collision with a business premises on Bradford Road.

“The driver left the scene.

“At around 5.40am officers attended an address in Pudsey and a man was arrested on suspicion of drink driving, failing to stop and assault of police officers.

“The man was taken to hospital, where he was found to have serious injuries and is continuing to receive treatment.

“A scene remains in place today on Bradford Road.”

“The car went through the front of the building and we had to make it safe. Nobody was trapped in the car and there was no driver when we arrived at the scene.”