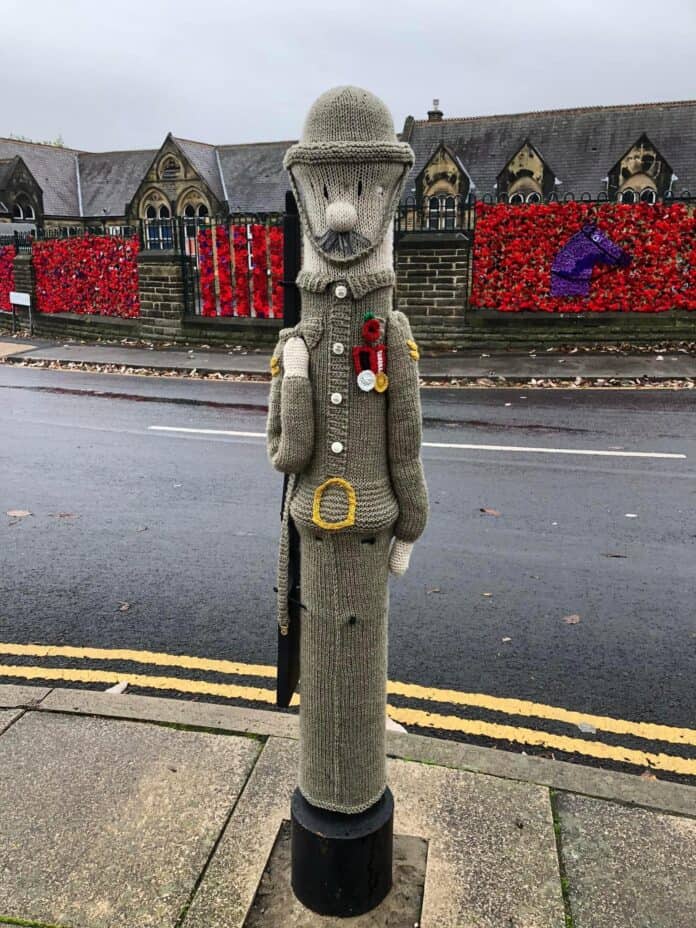 The work of a Pudsey-based knitting group has gone viral on social media – with a photo of soldier bollard-topper gaining over 85,000 likes from across the world.

The group of talented crafters from the Pudsey Community Craft group have this year again crafted a raft of beautiful tributes around Pudsey Cenotaph – WLD first featured their work in 2019.

The soldier bollard cover was created by Lisa Farrar and has accumulated a whopping 85,000 likes on a ‘post box topper’ Facebook page.

The post – by Pudsey Born and Bred admin Mark Elwood-Harrison – gained traction from and of knitted and crocheted postbox toppers around the world.

Lisa said in a statement: “We couldn’t have done the display over the years, without lots of hardworking knitters and crocheters.

“Four years later, we’re still working hard to produce the displays for Remembrance Day as a mark of respect for the fallen heroes.

“Lest we forget and respect to all the hero soldiers.”

The ‘knit and natter’ group is attended by a variety of ladies aged between 50 and 80 years old. It’s also produced Easter and Hallowe’en displays in Pudsey Park among other displays such as a giant Christmas ‘tree’ outside the Commercial pub.

In 2018 Lisa was a West Leeds Dispatch Good Egg award winner for her selfless work in tidying the streets of Pudsey.

Pudsey Parish Church will once again be displaying its Field of Remembrance of over 2000 poppy crosses alongside our silhouette Tommies, as a evocative and poignant place to ponder and remember. It will be installed for about a week before Remembrance Sunday.

On Friday 11 November there will be a simple Act of Remembrance starting at 10.45am at the Cenotaph and including silence at 11am. All are welcome, including representatives of local schools.

The main activity will be on Remembrance Sunday, 13 November when Pudsey Parish Church will be open from 9am-1pm for visitors to light candles, sit, pray and remember.

The Remembrance Parade will leave the Bus Station at 9.45am and arrive at Pudsey Parish Church for a civic service from 10am-10.45am after which the congregation moves to the Cenotaph for a short service including the 11am silence. The Parade will then return along Church Lane to the bus station.