Calverley Woods is a great place to explore as not only does it have loads of wildlife it has lots of history too, writes Mark Stevenson.

Trees have been felled and stone quarried in the woods since the 14th century. If you are really lucky you might find the really old stuff like the stone circles and prehistoric markings.

The woods have a hanging stone. Whether the name comes from or how it hangs off of the rock below it or because people were hanged there, I don’t know.

You can even walk in the footsteps of the Jaggers and their packhorses on the old walled packhorse route through the woods.

Calverley Cutting was cut to replace the old packhorse way through the woods between Carr Road in Calverley and Apperley Bridge. It was cut through sandstone rock in 1856.

It was meant to be part of a scheme to develop the area for the housing of rich people. No-one liked the steep new road and the scheme failed.

It even has a reservoir of sorts, which is the remains of an 1861 agreement between the Thornhill Trustees and Woodhouse Grove School. The school wanted to lay a pipe from the springs in the woods to the school to supply it with water, which they did for the next 30 years or so.

The remains of buildings from WW2 can still be seen. When they were used by our troops during their training for D-day and to briefly house POWs.

After the war, these buildings were used to house soldiers and civilians who, for one reason or another, could not return home.

By 1947 the buildings were used as a fireworks factory and, as you might expect with the lack of health and safety at the time, people tended to get blown up and either seriously injured or killed.

The last explosion killed three people and the factory closed in 1957. 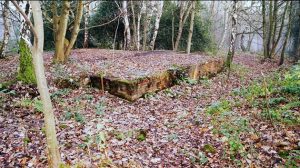