Mark’s History: Miss Blythe and the poisoning of a Bramley family 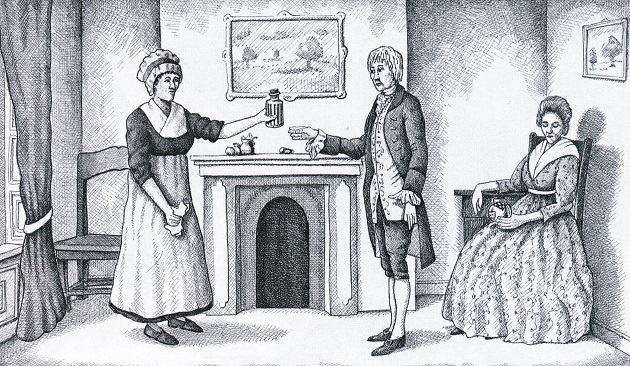 In 1806 there lived a woman called Rose. She was concerned about her friend Rebecca, who had become sick and some days later was to die, writes Mark Stevenson.

Rose and Rebecca had grown up in Bramley and had known each other since they were children. She thought it strange that Rebecca should suddenly become so sick.

William, Rebecca’s husband was also sick. Rose thought it might have been something they had both eaten as William had made mention of a foul-tasting pudding both him and his wife had eaten.

Rebecca’s lips were black and there was a froth coming from her mouth so Rose gave some of the pudding to the cat which after a few moments began to be sick and its lips also turning black it quickly died, as did some birds who had pecked at the crumbs.

William and Rebecca were superstitious people and had for months been receiving instructions in the post from a Miss Blythe on how to get rid of Rebecca’s chest infection.

“My dear friends. You must begin to eat pudding on the 11th of May, and you must put one of the powders in every day, as they are marked, for six day — and you must see it put in yourself every day, or else it will not do.
If you find yourselves sickly at any time, you must have no doctor, for it will not do; and you must not let the boy that used to eat with you, eat that pudding for six days; and you must make only just as much as you can eat yourselves; if there is any left it will not do. You must keep the door fast, as much as possible, or you will be overcome by some enemy. Now, think on, and take my directions’, or else it will kill us after.
About the 23rd of May, I will come to Leeds, and send for your wife to Mary Bateman’s; your wife will take me by the hand and say, Thank God that I ever found you out. It has pleased God to send me into the world, that I might destroy the works of darkness; I call them the works of darkness, because they are dark to you—now mind, that whatever I say, you do. This letter must be burnt in straw, on the hearth, by your wife.”

William Perigo continued to pay Miss Blythe for more than two years until he discovered one of the “charms” which he and his wife had received from Mary Bateman (Miss Blythe) was worthless paper; he went to the authorities who arrested Bateman the following day after William lured her to a meeting.

In March 1809, she was tried in York and found guilty by a jury of fraud and murder.

Sentenced to death, Bateman attempted to avoid her execution by claiming she was pregnant, the judge had to have the doors to the court locked as all the women tried to leave knowing they might be asked to examine the “Witch of a woman” to prove her pregnancy.

A later physical examination disproved this. She was finally hanged alongside two men on 20 March 1809. After her execution, her body was put on public display. Strips of her skin were tanned into leather and sold as magic charms to ward off evil spirits.