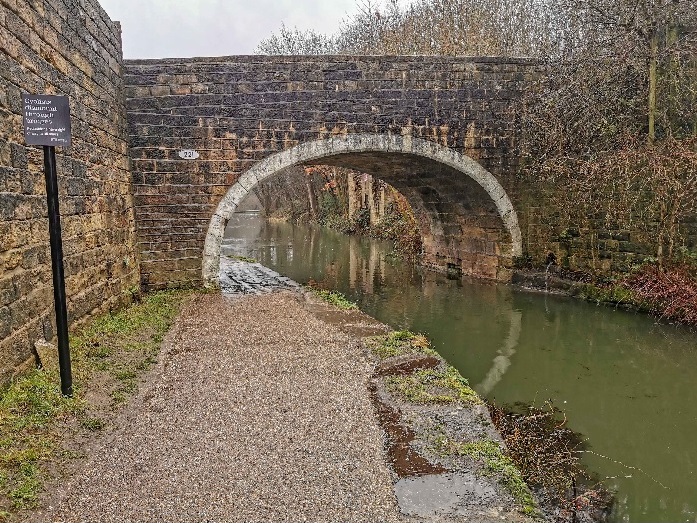 This walk picks up where last week’s walk around Rodley left off and it is between Moss Bridge in Rodley and the old canal bridge at Newlay.

You need to find yourself at Moss Bridge – just walk down Rodley Town Street with Rodley Park on your left and the big long building on your right.

Eventually, on your right, you will see a little car park and a view of Moss Bridge which is a swing bridge that has a habit of sticking shut in the summer when it heats up or so the barge people tell me.

Once on Moss Bridge again just take a minute or two to get your bearings. From the bridge, you will be able to see the gate to the old sewage works (now Rodley Nature Reserve) and the gate to what was Airedale Mills.

I have read about dead bodies been found near this bridge and that the person finding the body if busy would give it a kick so someone else might find it further down the canal and it would become their problem. Not sure how that would work as it is a canal with no current to speak of.

Cross the bridge and keep the canal on your right and you will notice an old wall with a blocked-up door and a few pipes sticking out of it.

I call this smoker’s corner as there is an old pic of a barge passing by with some people from Airedale Mill (to which the wall belonged) outside the blocked up door having a smoke break, least that’s how it looks to me.

On your right, you will notice the big long building you would have seen on Rodley Town Street. This is the old Crane Foundry (candidate for a blue plaque?). Rodley was a world leader in this field back in the day.

With the coming of the Foundries to Rodley, all of the cottages on this side of the canal were lost. I cannot imagine that everyone was happy to lose their home.

Walk past the old wall and you will come to a drain (just look for the metal guard) on the left-hand side of the towpath.  If this drain was built when the canal was built (1770’s) then it would be one of the oldest structures in Rodley.

Either way, it is on the 1840’s maps so its at least a 180 years old. If you look through the trees you can just see the remains of a drain in the nature reserve just across the river. This appears on the 1921 map but I think it may be older.

A little after the drain you will notice the remains of some buildings on your left in the trees. These do not seem to be all that old. They first appear on a 1955 map and may have been part of Airedale Mills.

Now just carry on walking down the canal and you will notice the trees and plants looking as you might expect in winter but that only adds to the ‘view’ and is always worth coming back to with the changing of the seasons.

On the right-hand side of the canal as you walk along you will notice that a lot of work has been going on with new paths and the trees also been ‘pruned’. Also if you look carefully you might see the Rodley Lighthouse which is not much use as a barge seems to have run aground in the field.

As you walk along you will notice a Swing Bridge in the distance as you walk to this look over to your right to the wall with the cars parked above it and if you look carefully you will see that the maker of the said wall had left his name and the year the wall was built carved into it.

When you get to the Swing Bridge you will notice Rossett Business Park across it and Ross Hall to the left on the towpath. There used to be a mill here. The first one was built in the 1220’s. The people who live in Ross Hall like their privacy so please respect that.

While you are walking along, having passed the swing bridge, it is always worth keeping an eye out for any deer that might be about.

Eventually, you will come to Whitecote House. The Whitecote House that we have today was built in 1744 and is the large building in the middle, the other two buildings at either side of it were built much later maybe with the coming of the canal.

The one to the left is known as Maltings Cottage and to the right is the Malthouse.

The 1891 Bramley Census has a Mr Samuel Westcott, a Clothery Agent and his seven children living at Malt Kiln House. All the buildings and canal side wall are listed including the stables at the back now someone’s home.

Swing Bridge no. 220 used to be at Whitecote House but the bridge is no longer there now.

On your right, you cannot fail to notice Fallwood Marina. The hill in the Marina is called Goole Delph Hill on the maps. The Marina itself was once a quarry called New Leeds Quarry. Whilst all the boats have a character with some unusual names, one stands out and that is the Abbey Pride, one of the little ships from Dunkirk. Read more on Abbey Pride here.

Along the towpath at the Marina is a wall it’s worth a look over it (be careful as its a big drop on the other side of it) because if you look towards the river you can still see a gate post from the old Aire Vale Dye Works that once occupied the site of the new housing estate that has been built.

Also, you can get up close to the Pill Box that dates back to WW2.

Now you come to Newlay Stone Bridge no. 221 which is the oldest bridge in Newlay and this is where the walk ends.

You can still see the grooves where the rope that connected the horses to the barges would rub against the walls. It’s also worth a look from the bridge back along the canal.

Check out a map of this walk here. Read more of Mark’s History articles here.