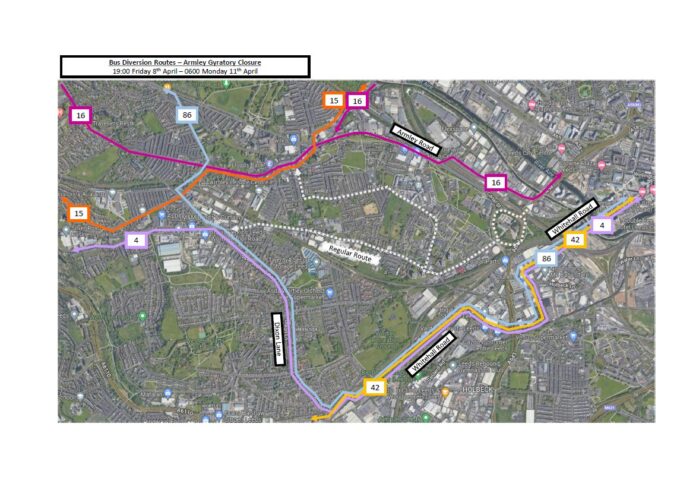 Armley Gyratory will be fully closed at the weekend to allow work to start on a £42m road widening scheme.

The busy gyratory will be fully closed to all vehicles from 8pm on Friday, 8 April until 5.30am Monday, 11 April.

The highways enabling works mark phase one of construction taking place this year on the Armley Gyratory to improve vehicle flow – and has been described as “critical” in reducing the number of cars in the Leeds city centre.

On Monday, 11 April the road will fully re-open with 30mph speed limits, narrower lanes, and other traffic management measures in place which will allow the main improvements to be carried out safely.

The following services will be diverted due to the closure of Armley Gyratory, according to Metro:

72 towards Leeds City Centre will run the normal route.

“Leeds City Council’s Connecting Leeds team are working hard to deliver these improvements as quickly as possible and apologise for some significant disruption to journeys over the coming months.”

To prepare for this closure and subsequent works, Leeds visitors, workers and residents are being urged to plan ahead before travelling and to sign up for regular e-mail updates or follow Connecting Leeds on social media. There will also be highways and diversion signage, with targeted communications in affected areas.

The £42m project is part of Connecting Leeds’ work on several major highways’ schemes, which are all part of transforming travel in the city and across the district.

It will also see works around City Square, Leeds train station and along routes linking to the city centre. This will be the first phase to create a world-class public space and arrival gateway to the city centre for train, bus users, pedestrians, and cyclists, and will eventually see City Square closed to through traffic in readiness for the Year of Culture in 2023.

These are all part of over £100 million of transformative highways works to overturn historic barriers and issues developed from the ‘Leeds Motorway City’ of the 1970s.